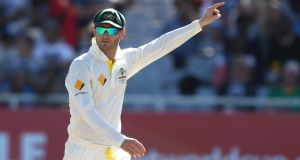 Australia took complete control of the deciding third test against South Africa on an elongated third day in Cape Town.

Replying to Australia’s 494 for seven declared, the Proteas were bowled out for 287 as Mitchell Johnson took four for 42 and Ryan Harris three for 63.

Australia closed on 27 without loss in their second innings for a lead of 234.

Following a rain-abridged second day, Australia declared on their overnight total — stranding South Africa part-time spinner JP Duminy on a hat-trick — and made early inroads in the hosts’ reply.

Captain Graeme Smith made just five before edging a ball angled across him by Harris behind to keeper Brad Haddin.

Alviro Petersen and Dean Elgar put on 35 but the latter was dismissed for 11, Haddin this time changing direction to take a magnificent catch off James Pattinson’s bowling.

Petersen put on 53 with Hashim Amla and pushed Johnson for three to reach a run-a-ball half-century, but then had to dig in for a battle as the left-armer produced a hostile spell.

After unflinchingly taking one on the upper arm, Petersen was less secure against the next short ball and gloved down the leg side, giving Johnson a trademark wicket and Haddin his third catch.

The build-up to the match had been dominated by talk of reverse swing, with David Warner fined for his comments about Proteas wicketkeeper AB de Villiers.

And Harris found some as he brought a superb delivery back in to Amla (38) to bowl him through the gate and leave South Africa 121 for four.

The ball was reversing for Johnson as well and he induced a loose edge from De Villiers (14), Michael Clarke taking the catch at second slip.

That was 133 for five and it became 146 for six when Duminy (four) edged Harris on the walk and Haddin took the catch.

By tea, though, Faf du Plessis and Vernon Philander had staged a recovery of sorts to 200 for six.

It was not without alarm, though, for Du Plessis in particular — starting from his very first delivery, as Australia’s appeal for caught behind was turned down. They opted not to review, but Hot Spot appeared to show a slight mark on the inside edge.

Du Plessis should certainly have been stumped for 30 after missing a Nathan Lyon delivery, but a rare error from Haddin reprieved him.

A sweep two balls later burst straight through Alex Doolan at short leg, who had little time to react, and Haddin got a glove to an equally difficult leg-side chance but could not hang on as Du Plessis reached tea on 42 with Philander on 18.

Du Plessis clipped Lyon wide of mid-on for four to reach his 50, his fourth boundary from 118 balls, and produced an exact replica next up.

On 67, though, he drove away from his body at Johnson and was neatly caught by Warner at point to end the stand five short of 100.

Kyle Abbott (three) played inside a Shane Watson delivery that shaved his off stump but Dale Steyn carved the same bowler for two fours.

Steyn edged one Johnson bouncer for four but was struck on the head by another and after upper-cutting the same bowler for another boundary, he fended him to Watson at slip to depart for a defiant 28.

That left South Africa short of the follow-on mark but Clarke chose not to enforce it and Australia openers Chris Rogers and Warner made 27 in the six overs before the close.

1 Gerry Thornley: Home and away Six Nations could be its ruination
2 Saudi Arabia-funded takeover of Newcastle United in serious doubt
3 Decision expected next week on staging of College Football game in August
4 Rugby players taking the opportunity to focus on the long game
5 Net-tricks: How John McEnroe became the inner voice of a 15-year-old girl
Real news has value SUBSCRIBE