Tears flow on a golden day for Ireland's Sanita Puspure 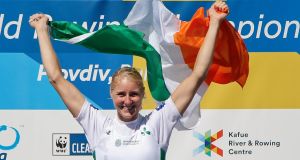 When the gold was won and she was back on land, Sanita Puspure rushed to her families. The embrace of children Patrick and Dani and husband Kaspars. And then into the arms of her fellow women on team Ireland. There were tears from Aifric Keogh.

Puspure had woken up to the whirr of wind, and the prospect of choppy water. Her least favourite conditions, and ones that have dogged this talented athlete in her quest to win a World Championship medal.

“The girls [her team-mates] were really psyching me up. I mean, there’s a lot of credit that goes out to those girls. They went out last night [Keogh and Emily Hegarty had finished their programme] and then they were up at eight o’clock coming to distract me. It’s just so lovely, and I know they care.”

Puspure, the happy athlete of 2018 who eats more, trains to a new programme and relaxes into the embrace of her team-mates, is a world-beater.

She had won her heat and semi-final by blasting away at the start and staying in front all through. This time, even with tough conditions and taking on the defending champion Jeannine Gmelin, Puspure raced exactly the same race. The Swiss launched a determined challenge after the 1,000-metre mark, but Puspure met it and actually stretched her lead.“I felt tired in the final quarter,” she said.

But she would not let the gold go. She won by a stretch of clear water, making light afterwards of the conditions, which had precipitated a new lane draw.

“This felt great. I feel good!” she said. “I’m not a fan of choppy water, but I suppose when you are in a good racing mood and ready to go there’s not stopping.”

“Finally! Finally!” she said as she approached The Irish Times. “My first and it is gold. That’s really special.” In almost a decade of campaigning with the Ireland team she had never won a World Championship medal.

The tactic of “go out fast and stay in the lead” was a conscious choice. “We’ve trained so hard. I have the physiology to do it. So it was just ‘go, and keep going’. At the end I was getting a bit tired. I didn’t have that much left for the last sprint, but I didn’t need it.”

Puspure (36) has often appeared as if she had the ability to win but not the belief. Under coach Dave McGowan and high performance director Antonio Maurogiovanni she had come into her own.

“She really earned it. She beat the other girls, but she also beat the fear of rough water. That’s the sign of a tough athlete,” McGowan said.

“I still can’t believe it in a way,” Puspure said. “I’ve been thinking about myself in the middle of the podium for the past week. And when I won my heat I thought I have a really good chance to do it. But knowing that it almost gets you a bit more nervous.

“I am used to being underdog, so when you go out it’s ‘let’s play and see what happens’. Now, I had clear intentions to go ahead and stay first.”

Her daughter, Dani, and son Patrick joined her after she had received her gold meda. She hugged them close. As they parted she gave the little toy that the organisers present on these occasions to Patrick.

He looks at his sister. “Have you got another?”