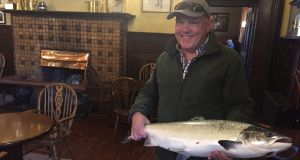 Seamus O’Neill from Cavan with his 6.3kg beauty at Ballynahinch Castle Fishery. 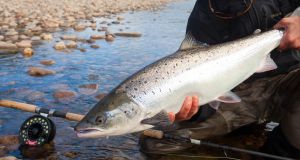 A magnificent salmon from Ponoi River in Russia on opening day.

The venture has now been nominated for the Institute of Water National Innovation Awards.

In the past few years NRW’s laboratory started using a sampling technique for detecting herbicides in water called the “Chemcatcher”.

The Weed Wiper was developed with key partners after routine monitoring showed increased levels of the herbicide MCPA in the river Teifi and Wye. While levels were too low to cause any health or environmental risks, increased levels could lead to installing additional expensive treatment processes to remove the herbicide from water.

In order to tackle the problem at source, DCWW offered free hire of weed wipers to farmers and land managers in the river Teifi and Wye catchments. The wipers have the added benefit of being licenced only for use with glyphosate.

Glyphosate not only kills weeds to the root, but has less impact on water quality as it can break down in three days compared to MCPA, which takes 15 to 25 days. A total of 183 farmers registered an interest in 2015.

The co-operation of farmers and land owners has been excellent and the initial feedback very positive, with farmers saying the machines were easy to use and as effective as other chemical methods in controlling rush and grassland weeds.

Philip Morgan for NRW, said: “Projects like this can help us achieve our goal of protecting our natural resources and ensuring a prosperous Wales.”

Welsh Water’s chief executive, Chris Jones, added: “Reducing these levels means we can use fewer chemicals and energy to treat drinking water. This is good news for our customers and our beautiful environment. It is vitally important that we all help play our part.”

The Silver Badger took over for the remaining three, one for fisheries guide Cyril Biggins on Beat 1 of 2.7kg, then old stalwart Tom McManus stepped up to land a 1.8kg fish on Beat 4/5. However, it was Seamus O’Neill from Cavan who stole the show with a beauty of 6.3kg at Snabeg. All fish were beautifully fresh.

Larry McCarthy from Corrib View Lodge, Glencorrib, reported an improvement in fishing with some great catches on buzzer and caenis. A party from Cumbria, fishing the lower lake, caught several fish in the 1.5kg to 2kg mark on dry buzzer patterns. Caenis appeared midweek and both Larry and Owen Melling from Wales caught 19 over two days with many in the 2kg bracket.

In the Cong area, Stephen Lydon (lydonslodge@gmail.com) said fishing produced mixed results. Gabriel Cosgrove had four trout dapping in the Castletown area while John and Conor Moran had a fish each on wets, both sportingly returned.

Galway angler Harold O’Toole had excellent fishing on Lower Corrib catching six trout for an estimated 10kg, all on buzzer.

Mayfly to peak in mid June

With the copious amount of mayfly and the lack of interest from the trout, it can be surmised the trout are stuffing themselves sub-surface.

The Wulffs continue to work well with the Royal and Grey doing best. The Green Dabbler and Peter Ross feature highest among this tying. Goreport, Bog Bay, Stoney Islands, back of Church Island, Holy Well and tight to the western shore reported good catches.

Numbers fishing the lake were high, reflected in the number of fish recorded which reached almost 700. Welsh angler Kieron Thomas caught the heaviest fish of 4kg on a nymph pattern, and total number of trout recorded was 696.

Ladies do well in Perthshire

Results: 1, Scotland, 71 fish; 2, Ireland, 49f; 3, England, 40f; Wales, 35f. Next year’s international will be held on Lough Melvin in Fermanagh and the next qualifier is scheduled for Carrigavantry Lake, Kilmeaden, Co Waterford, next Sunday. Entries to jmgerry@gmail.com