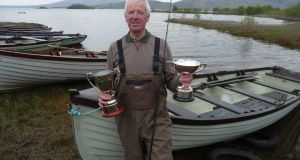 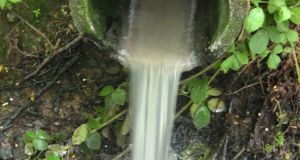 The wastewater discharge pipe which was discharging polluting efluent into the Ballinagh River in June 2015. 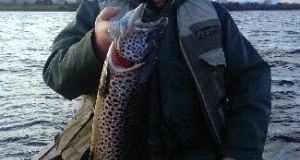 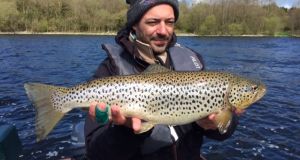 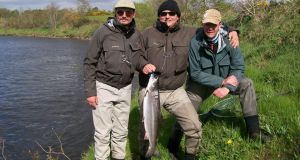 Thomas Merkel, from Germany, with a 5kg salmon caught on fly in East Mayo Water on the Moy

A group from Wicklow Anglers’ Association held their annual outing to Lough Mask last weekend, staying at Máire Lukes in Tourmakeady. It was my first time to tag along and I must say I thoroughly enjoyed the experience.

Apart from the fishing, the craic among the 24 anglers was mighty and the accommodation, food and bar facilities were all first class. Proprietors Barbara and Frank Philbin (of Philbin Boats – 094-954 4080) know how to look after the anglers’ needs.

Fishing on the Saturday was an all-day affair with wet and dryfly and dapping permitted. Along with my boating partner Lucas Glendon, we tested the bays along the Kilbride shoreline with little success.

However, upon reaching Ferrybridge we hit a purple patch and within 90 minutes met at least 20 trout, boating five including one close to a kilo. The International Dabbler was key to success.

Stuart McGrane won the day with four trout and, over dinner, was duly presented with the Wicklow Cup by club secretary Ronan Meghen.

Fishing on Sunday was curtailed to 3pm and the quarry on this occasion was for the heaviest fish. Again, Stuart topped the poll with a fine fish of about 0.9kg.

A great weekend, can’t wait for the same again next year!!

Trout hatchery closures
Well known game angler and angling activist Betty Hayes is very angry at the action being taken by Inland Fisheries Ireland to close all of its trout hatcheries. “I have actively promoted managed private and man-made fisheries with support of my colleagues, firstly on the fisheries board and then as a member of the national forum.

“I firmly believe that such facilities have taken the pressure off wild fish stocks and are proven to be the most successful method of introducing children and indeed adults into the sport.

“Sadly, closure of Roscrea, Cullion and Cong, will mean the loss of many important fisheries as they depend on these hatcheries. Availability of certified stock from the Republic of Ireland has been the basis on which they have been set up and developed,” she said.

Senior fisheries environmental officer Ailish Keane gave evidence that she had written to Irish Water on several occasions prior to the incident about failings at the treatment plant, but the company had not acted.

Judge McLaughlin refused to consider a plea by defence counsel to consider a donation to charity, insisting that the delay in rectifying the issue by Irish Water and the serious level of pollution, merited a conviction. He convicted and fined the company €2,500 in addition to costs amounting to €3,917.43.

Seven salmon recorded
At the Galway fishery it was a quieter week as rain forecast resulted in the OPW opening four sluice gates on the weir, and it has remained at that level since. There were seven salmon recorded, all on spinner or shrimp, with conditions made difficult for fly anglers in the high water.

Good fishing on Beltra
Lough Beltra continued to produce a number of fine spring salmon. Didier Letourmy had a 3.1kg fish at the mouth of the Glenisland River on a Jaffa, while Eamon Kennedy caught an 11 pounder at Morrison’s Point on an Oisin Shrimp.

The best fish of the week, however, was caught by David Hawley at the Forestry. David’s cracking 15 pounder took a Jonah Lomu and was followed by another salmon of 4kg, which was released. For bookings, visit loughbeltra.com.

World champion
On Sheelin, a number of French anglers fished the lake recently, including Yaan Caleri and Philippe Dolivet. Caleri has the prestigious title of being world champion in fly fishing twice over and has represented his country on 10 occasions. Sheelin did not disappoint and some beautiful fish were caught, the heaviest touching 2.5kg.

The ITFFA is holding a youth fund-raiser competition next Sunday out from Kilnahard, Co Cavan, fishing 11am to 6pm. Entry fee is €50 and anglers may choose their partners. First prize is €1,000 with many additional prizes. Enquiries to Frank Dempsey, 087-2351830.

Lough Derg continues to produce trout to the mayfly although reports vary widely as to the quality of angling. Lough Ree hatch of mayfly should start within the coming week and Derravaragh is also producing a few trout to wetfly. As Derravaragh is a fishery still in recovery, anglers are requested to return all trout.