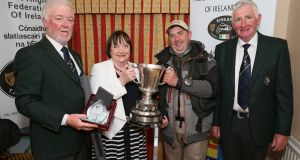 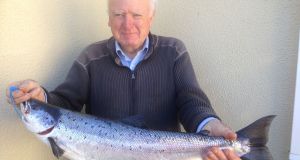 Vincent Duigan with his 4.5kg springer on the Moy. 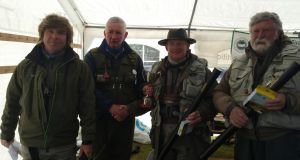 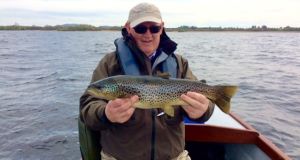 Following a review of its fish farming operations, Inland Fisheries Ireland (IFI) has decided to phase out the facility over the coming years. Instead, the board intends to concentrate of its core remit of conservation, protection and development.

The small number of staff directly involved in fish farming operations were informed of the decision recently and given assurances there will be no compulsory redundancies as a result of this move.

IFI’s chief executive, Dr Byrne, said: “Reduced resources do not allow for continuation of aquaculture activities in the medium to long-term. We acknowledge the support of customers and regret the organisation is unable to continue supporting fish stocking in this manner.”

The Economic and Social Research Institute (ESRI)) is undertaking research on the socio-economics of inland fisheries. The objective is to provide evidence to support policy decisions on the management of fisheries resources and angling within Ireland.

As part of that work they are currently establishing an angler survey panel. Members of the panel will be invited to participate in occasional short surveys to elicit their views on various topics. The programme is financially supported by IFI.

Data collected will only be used for research purposes by the ESRI and will not be shared with IFI or other organisations and will only be accessible to researchers undertaking the analysis strictly in accordance with the Data Protection Acts, 1988 and 2003.

Only research reports and papers which contain aggregated summary analysis will be provided to policy decision-makers. The ESRI will make its research papers free to the public from its website.

John Curtis is leading the research programme and may be contacted at john.curtis@esri.ie.

To become a member of the panel, sign-up at http://www.esri.ie/angling/.

The April issue of SeaHealthUCD is again aimed at personnel in fisheries and aquaculture, fish packers, processors, distributors, retailers and health professionals. The latest edition looked at the boarfish species ( Capros aper) and tests showed that boarfish mince gave strong gels, indicating good water-binding properties and potential for a range of fish products.

Trials were broken down into four categories: effect of long-term storage at -20 degrees on gel strength; storing as frozen whole fish versus frozen mince; preparation of boarfish surimi and composition of the species caught on six different dates.

Conclusions showed that the mince produced strong gels indicating it is a robust species in terms of freezing and frozen storage. The surimi produced in the laboratory had an attractive light pink colour and gave strong gels. There was no difference in composition values for six batches caught in a four-week period in November-December, 2016.

This study was conducted by Eimear O’Keeffe and Prof Ronan Gormley of the UCD Institute of Food and Health, Belfield, Dublin.

More salmon on the Weir

Galway angler John McCarthy also had a 4kg fish on spinner, while local man Eoin Trill landed a 2.7kg fish last Wednesday on shrimp. Cold gusty conditions are making things difficult, but an improvement forecast for next week should get things moving. With fish running the river prospects for spring fishing over the coming weeks are good.

First salmon on the Moy

On the Moy, the Ballina Salmon Anglers’ stretch enjoyed reasonable fishing, with Mark Beattie landing a 5.6kg fish on worm. Newly appointed Coolcronan fishery manager Garry Keaveney had the first salmon of the season on the Coolcronan water on worm.

Despite the cold and gusty northerly winds, anglers on Carrowmore Lake enjoyed good spring salmon fishing. A total of 21 fish were reported of which more than 50 per cent were released.

Teenager Tom Bell (13) will definitely remember his day as he caught his first ever salmon on fly. John Campbell had the best fish of the week, a fine 4.5kg salmon which he released.

Water levels on the Drowes fell a little due to the extended dry period. The river was quieter from an angling perspective and the fish not as forthcoming as previous week with only five salmon caught.

On Corrib, the Cornamona AC hosted their annual pairs’ competition, with proceeds going to the Galway Hospice Foundation. Since 2008, the club has raised more than €20,000 for this worthy charity. The event attracted 58 anglers, with 74 trout recorded and returned, the longest reaching 60cm by Mike Shanks.

On Lough Arrow, only the sheltered bays saw sporadic hatches of duckfly and some olives. Nevertheless, those who braved the elements reported good catches on wet flies.

Donal Hegarty is in the process of setting up a new ghillie fly fishing service on Loughs Ree and Ennell, and may be contacted for bookings at dh.flyfishinguide@gmail.com. In his first report, he says angling is starting to pick up on Derg with a few mayfly appearing and some trout were caught on wetflies. On Ree, two fine trout of more than 3kg were taken on mayfly nymphs.

Jones says new players will form 60 per cent of England’s next World Cup squad 18:30
Travel restrictions could hit Ireland hard when racing returns 17:34
Tottenham’s Son Heung-min to start mandatory military service in S Korea 17:31
Irish racing would need no more than 10 days to start up again 18:23
Postponed 2020 US Masters rescheduled for November 16:31
Here is your handy guide to sport on television this week