Andy Murray taking nothing for granted in Davis Cup

‘We can win the tie, obviously, otherwise there would be no point in us being there’ 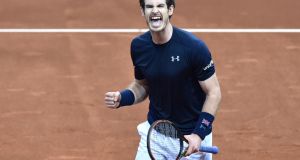 Andy Murray believes Great Britain are in a strong position to win the Davis Cup but is taking nothing for granted.

The final against Belgium is tied at 1-1 after the first day of play at the Flanders Expo in Ghent and Andy and Jamie Murray are hot favourites to win the doubles rubber on Saturday.

Should they do so, victory for Murray over Belgian number one David Goffin on Sunday would clinch Britain’s first Davis Cup title since 1936.

Murray had his tough moments against Ruben Bemelmans and his vocal army of supporters, receiving a point penalty for swearing, but was comfortable enough in winning 6-3 6-2 7-5.

The Murrays have won dramatic doubles rubbers against both France and Australia this year, and the world number two said: “I believe in myself. I believe in me and Jamie as a doubles team, as well.

“But it’s obviously going to be tough. Goffin’s a top-quality player when he plays well. I’m aware that will be a very tough match to win. In the doubles, Davis Cup is always tough, never easy, just because of the way doubles is played.

“I believe we can win the tie, obviously, otherwise there would be no point in us being there. But it’s going to be tough, for sure.

“I don’t think (the doubles is) as important as in some of the ties. I believe if we lost the doubles, we could win two singles on Sunday. Kyle could have won today. If he was to play at that level against (Steve) Darcis, that’s not an easy match for Darcis.”

Belgium named Darcis and Kimmer Coppejans as their doubles team at the draw on Saturday but it would be a surprise if they did not bring either Bemelmans or Goffin in.

Whether they would want Goffin to play all three days is debatable but the 24-year-old was on a high after his first ever comeback from two sets down.

He said: “I’m feeling really good. I’m ready if I have to play tomorrow and Sunday.

“Sometimes some wins like this give you more confidence, when you’re not playing your best level, but you are playing with your heart. For tomorrow and for Sunday, my motivation is higher than before the match.”

British captain Leon Smith also has a big decision to make about who out of Edmund or the experienced James Ward would play a decisive fifth rubber should it come down to it.

Edmund did not sound like he expected, or perhaps even wanted, it to be him.

The Yorkshireman said: “The team and myself obviously will look at what I’m doing physically. Our opinions, should I play, shouldn’t I play, should James come in. Whatever happens, again, I’ll give my best. That’s all I can do.”

1 Seán O’Brien: Anger over my parents’ break-up never left me
2 Dan Martin back to third in Vuelta after a wet and wild Stage 6
3 Mayo relegated for first time in 23 years after pulsating Tyrone encounter
4 Hugo Keenan and Will Connors: The best of friends, the best of debuts
5 Ireland 50 Italy 17: Ireland player ratings
Real news has value SUBSCRIBE