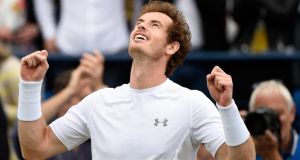 Andy Murray looked as good as he has done on grass since winning Wimbledon two years ago when he finished off two excellent opponents in one day, Viktor Troicki and Kevin Anderson, to win his fourth Aegon Championship title at Queen’s on Sunday.

In the morning, he took an hour to end the Serb’s challenge in the held-over semi-final, 6-3, 7-6. In the afternoon, he reached an even higher pitch of excellence to beat Anderson 6-3, 6-4 in just a few minutes longer in the final.

Murray joins John McEnroe, Boris Becker, Andy Roddick and Lleyton Hewitt as a four-time winner at Queen’s. He is also one of seven players to have completed the Queen’s-Wimbledon double and is in terrific shape to emulate his feat of two years ago. He even thinks he is playing better tennis this year than then.

“Both matches today were good performances,” he said. “I played a little bit better as the week went on. When you’re playing the match you’re just focusing on the next point, not how well you’re playing. I’m often very critical of myself.

“I had to play well to win today. I’m playing better than 2013 but it’s difficult to win these events. Everyone is improving all the time. I still think there are things I can improve on. Obviously you want to go to Wimbledon with matches under your belt. I need to use the next seven days as good as possible.”

Frew McMillan, who won three Wimbledon doubles titles with Bob Hewitt, went so far as to say on Eurosport: “If he keeps this up at Wimbledon, he would be the hot favourite, in my mind.”

The former British No 1 Annabel Croft agreed, although Greg Rusedski still thinks the world No 1, Novak Djokovic, is the player to beat.

But there could be no faulting the sheer brilliance of Murray’s shot-making under pressure from two of the biggest servers in the game. He lobbed, dropped it short with great judgment, went cross-court hard and flat off both wings. He served well too and, even took the sting out of many of the 130mph-plus serves of Anderson, block-defending when he could get a racket on the ball, then working his way into the point.

Anderson still managed to put 10 aces past him, taking his tournament total to a remarkable 106.

Anderson, who lost to Murray at Wimbledon last year, said: “He’s a terrific player and has had such great success on all surfaces. It’s tough playing him here – but great fun.”