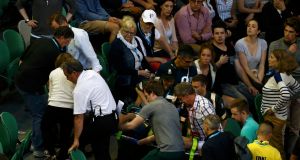 Andy Murray’s father-in-law, Nigel Sears, collapsed in the stands at the Australian Open on Saturday night and was taken to hospital, conscious but injured, while the world No2 was still playing his fourth round match against João Sousa on a nearby court.

Sears was watching his player, the former world No1 Ana Ivanovic, against the American Madison Keys on Margaret Court Arena when he fell heavily.

ESPN reported there was, “a massive pool of blood” where he collapsed in the interval after the first game of the second set.

Ivanovic was alerted to movement in the stands, and looked up to her box where she saw medical staff gathering. “I think it’s my coach,” she was heard to say on the courtside microphone.

The chair umpire suspended play, and the news got through on social media to Murray’s court, Margaret Court Arena. The Great Britain captain, Leon Smith, was seen passing Murray’s mother, Judy, a phone which apparently had a message on it about developments next door.

There was immediate consternation evident in Murray’s box but it did not appear the player – who is awaiting the arrival of his first child with Sears’s daughter, Kim – was aware of the incident.

Medics applied a defibrillator and carried him away on a stretcher. Play was suspended, but resumed after 50 minutes. When she returned Ivanovic had a smile on her face, encouraging the view that Sears was recovering.

The players had been given the option of continuing the match or postponing play, so their decision to carry on was another sign that Ivanovic’s coach was at least improving.

Murray already said he would leave the tournament if he heard news that Kim was about to give birth, although the baby is not due until mid-February.

If there is concern about the health of his wife’s father, however, he might bring that decision forward.

Murray’s brother, Jamie, is also at the tournament and through to the third round of the doubles with his new partner, Bruno Soares, after another win earlier in the day. After the incident, he was seen in the office of the tournament director, Craig Tiley, supposedly being kept up to date on developments.

Andy met Kim through her father, who was a moderate player but became an excellent coach. He guided Daniela Hantuchova to No5 in the world. He was appointed captain of the Great Britain Federation Cup team in 2006, and took up with former world No1 Ivanovic in 2011. Her career picked up, reaching the quarter-final at the US Open in 2012, her first match at that level since the French Open in 2008.

They split after the 2013 Wimbledon and were reunited in July last year.