Andy Murray in a hurry at Wimbledon 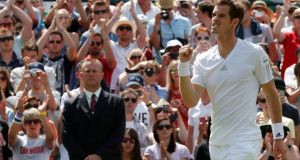 Andy Murray reacts after defeating Blaz Rola of Slovenia in their men’s singles at the Wimbledon. Photograph: Suzanne Plunkett/Reuters

Andy Murray pulled off the most emphatic Wimbledon win of his career to race into the third round.

The defending champion was in sublime form on Court One, needing just an hour and 24 minutes to see off Slovenian Blaz Rola 6-1 6-1 6-0.

Murray said: “I played well. This is the first year he’s played on grass. He just came out of college and he’s broken into the top 100 so it was tough for him.

“He doesn’t have much grass-court experience but he’ll definitely keep improving because he’s got a good game. I just had to concentrate on my side of the net and I took care of my serve pretty well throughout the majority of the match.”

Murray had never previously dropped fewer than six games in a match at the All England Club, while it was his most one-sided result at a slam since losing just one game to Alberto Martin at the Australian Open in 2007.

The Scot had begun his title defence in fine style with a comfortable win over David Goffin, and Rola was another unknown quantity.

The world number 92 was playing in only his third grand slam tournament and was no doubt disappointed not to have been given an outing on Centre Court.

Left-hander Rola had lost twice to British number three James Ward in the last month, at the French Open and Queen’s, so was not expected to trouble Murray.

And Rola’s nerves were obvious as he allowed Murray to break serve in the opening game, throwing in a double fault and a number of mis-hits.

The 23-year-old Slovenian only began to play on the tour full-time this season after going to university in the United States, as Murray was aware, and has risen up the rankings quickly.

A big forehand is his main weapon and he had Murray in a spot of trouble at break point down in the fourth game, but the Scot saved it with an ace.

Murray then showed his full repertoire of skills — no doubt to the delight of new coach Amelie Mauresmo — to break again for 4-1 and took his third set point in Rola’s next service game.

Murray has a famously excellent record against left-handers — Rafael Nadal aside — which is a legacy of growing up playing against his brother Jamie.

And, after saving a second break point with an ace in the opening game of the second set, he made it six games in a row with yet another break of the Rola serve.

It was turning out to be a rather chastening way to spend Slovenia’s national day for Rola, who simply could not hold his serve.

The world number 92 finally stopped the run of games against him at nine but Murray promptly served out the set with a lovely dinked backhand.

Rola’s hopes of mounting the most unlikely of comebacks were dealt another blow at the start of the third set.

Having missed two break points, Murray played a stunning rally to move 1-0 ahead, ending it with a crisp forehand winner down the line.

The 27-year-old was in complete control, showing off all facets of his game and giving Rola a thorough runaround.

The Slovenian continued to have the odd glimpse on the Murray serve and created a third break point of the match at 3-0, but it went the same way as the others.

Rola then served successive double faults to leave Murray serving for the match, and he clinched it with a love game, ending on a delightful drop shot.

Next up Murray faces a match against either 27th seed Roberto Bautista-Agut or Czech Jan Hernych. Murray expected high marks from Mauresmo for his display. “I’m sure she’ll be happy with it,” he said.

“We’ll have a chat about the match this afternoon and then rest up and get ready for the next round. It’s been a good start.”

Solskjær defends media ‘target’ Mason Greenwood 22:31
Klopp says this season is the most challenging of his managerial career 22:30
Patrick Bamford nets hat-trick as Leeds ruin Aston Villa’s summit ambitions 22:18
Derry City blow away any relegation fears at breezy Brandywell 22:05
Dan Leavy gets back in the thick of things as Leinster trounce Zebre 21:51
Here is your handy guide to sport on television this week