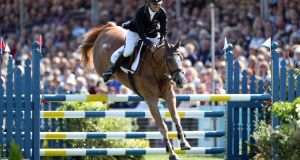 New Zealand’s Andrew Nicholson recorded his first success in the Badminton horse trials on Sunday with Deborah Sellar’s Spanish-bred gelding Nereo. The 55-year-old first competed at the four-star event in 1984.

Lying third going into the concluding phase, Nicholson, who broke his neck in a fall two years ago, picked up a single time penalty for a completion score of 41.4 penalties.

Next in, Germany’s Olympic and European champion Michael Jung lost his chance of recording a second four-star victory in a week when La Biosthetique Sam lowered one rail to drop below Nicholson on 44.

His compatriot Ingrid Klimke, who had taken over the lead following Saturday’s cross-country phase, was last to compete with Horseware Hale Bob. Unfortunately, they had three fences down, stopped once and incurred seven time penalties to drop right away to ninth on a total of 62.6.

It was a good day for New Zealand with Tim Price finishing third on Xavier Faer (49.2) while Mark Todd filled fifth place with NZB Campino (50.4).

Three Irish riders finished inside the top 20 with Joseph Murphy and Sportsfield Othello best in 13th place, one spot ahead of Clare Abbott and Euro Prince while Jonty Evans and Cooley Rorkes Drift were 20th.

Laurina finishes third behind Elfile in Punchestown mares’ hurdle 19:15
Joanne O’Riordan: One squeamish word could revolutionise the women’s game 19:00
Graeme McDowell sets his sights on Ryder Cup place 18:50
Áine O’Gorman comes out of retirement to answer Ireland’s call 18:07
McNamara makes four changes to Ireland U20 side for England clash 17:44
Here is your handy guide to sport on television this week