America at Large: UFC has too many shows and not enough stars 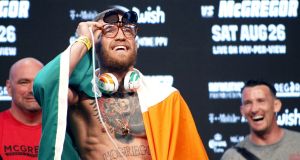 On Monday night, the person Dana White dubbed “the UFC’s biggest star ever” was thrown through a table by Stephanie McMahon at WWE Raw. Just 16 months after her last fight in the octagon, Ronda Rousey was getting fake body-slammed to promote her appearance at Wrestlemania 34 this weekend.

The woman who transcended mixed martial arts, gracing the covers of both Sports Illustrated and Ring magazines, snagging cameos in Hollywood blockbusters, has put away her gloves forever, and signed a contract to be a pretend wrestler in a scripted entertainment show.

As the dramatic nature of Rousey’s rise and fall lends weight to arguments that she wasn’t quite the fighter they advertised, and was more the product of slick marketing and careful handling (not uncommon in UFC), White is desperately casting around for somebody else capable of crossing over into the mainstream in a way that positively impacts at the pay-per-view box office.

The need for a new superstar is made more pressing by Jon Jones’ apparent inability to stay off steroids, and the continued protracted absence of the fighter formerly known as Conor McGregor.

That the Dubliner made more money embarrassing himself in one carnival sideshow last summer than he earned in his career in the cage sums up the strange place the sport has reached.

And the impact of that Mayweather debacle continues to reverberate. When Tony Ferguson was forced to pull out of this Saturday night’s UFC 223 headline bout against Khabib Nurmagomedov, White was asked why he didn’t invite McGregor to fill in at six days’ notice. A legitimate question. After all, it was his lightweight belt the pair were supposed to fight for, and the preening 29-year-old boasts of always being ready to throw down.

The UFC president explained it would be too quick a weight cut and more time was needed to properly promote a McGregor event. A smart enough response except everybody also knows that the Burger King salesman’s post-boxing bank balance makes negotiating with him a much more difficult proposition than before.

For defeating Eddie Alvarez at UFC 205 in Madison Square Garden, he took home an estimated $10 million. For doing an impression of a mediocre amateur boxer for nine and a bit rounds in Las Vegas, he earned around 10 times that sum.

So with McGregor unavailable and maybe out of reach financially, Max Holloway volunteered to face Nurmagomedov. Holloway’s decision to fly across six time zones from Hawaii to fight in Brooklyn is the kind of audacious move UFC devotees think marks their sport out as braver and different from the rest. Any time, any place…etc.

Of course, the rest of us regard it as one more ludicrous aspect of the game, especially since this is the fourth time a proposed Ferguson-Nurmagomedov contest has had to be scratched at late notice.

Four postponements in three years is not a good look when, from very early on, UFC’s unique selling point was that the best would always be forced to put it all on the line against the best. In an era when boxing was drowning in its alphabet soup of competing belts that allowed champions to spend entire careers avoiding credible challengers, nobody could hide in the octagon.

Well, after Ferguson claimed to have done his knee tripping over a wire, cynics might be forgiven for thinking the sport has a growing credibility problem in that regard. Not to mention allowing McGregor hold on to belts for years without defending them was never in the original UFC manifesto either. In some ways a victim of its own success, it grew so big so fast there are now too many shows and not enough stars of necessary wattage to light them up. More has definitely turned into less.

When it comes to the future direction of the sport, some of the bouts being mooted to bring McGregor back from his tabloid headline-generating machine hiatus are as disconcerting as those numbers.

Aside from the possibility of a rubber match against Nate Diaz, the fight serious fans seem to want, there is talk of him meeting Georges St Pierre, a soon to be 37-year-old Canadian with a serious pedigree but one competitive fight in the last five years. Still, that contest appears a legit prospect when compared to the tiresome yet increasingly likely possibility of a rematch with Mayweather in a cage rather than a boxing ring.

Halfway through his second year without competing in his chosen sport, there appears as much interest in McGregor taking on a 40-something boxer as there is seeing him engage with his actual peers.

It says something about the curious nature of UFC and the increasingly sordid sporting universe we inhabit that a circus act grotesquery has the potential to earn him many multiples of a showdown with Diaz or even Nurmagomedov.

To quote the fabled promoter PT Barnum, nobody ever lost a dollar underestimating the taste of the general public. A lesson we suspect McGregor learned a long time ago.