America At Large: Sports Pope/Dope – a mix of Dunphy, Clarkson and Partridge 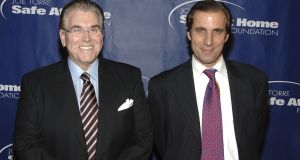 Mike Francesa (left) and Chris Russo: their relationship is to be the subject of a forthcoming ESPN documentary. Photograph: Andrew H Walker/Getty Images

Two years ago, then New York Mets second baseman Daniel Murphy took three days’ paternity leave when his wife Tori gave birth. The decision to miss games in order to be with his new baby Noah prompted Mike Francesa, the most popular sports talk show host in the city, to denounce the player and to question any man’s need to take time off work in these circumstances.

“One day, I understand,” he said. “Go see the baby be born, and come back. You’re a major league baseball player, you can hire a nurse. Your wife doesn’t need your help, those first couple days, you know that. What are you gonna do? Sit there and look at your wife in the hospital bed for three days?”

For nearly three decades, for 5½ hours each weekday afternoon, Francesa has pontificated like this on WFAN, America’s first sports talk radio station. For this type of unreconstructed shtick, he earns $4 million a year and is loved and hated in equal measure. The Sports Pope to some. The Sports Dope to others. Whichever side of the divide you fall on, his recent announcement that he will retire in 2017 marks the beginning of the end for a peculiarly New York institution.

On any given day, he will evince Eamon Dunphy’s talent for the polemic and Jeremy Clarkson’s brand of boorishness, delivering brazen and often wrongheaded predictions in a Long Island (pronounced “Lawng Guyland”) accent with an insouciance that has made him the most listened-to talk show among males between 24 and 55. For all the brashness and bloviating, he knows what his audience wants in the impressive way that Gay Byrne was once on the same wavelength as the Irish housewife.

In interviews, his questions to athletes and coaches are ridiculously elongated statements of his own exaggerated opinions rather than genuine inquiries designed to elicit answers.

Utterly dismissive of callers, the supposed lifeblood of the programme, he never, ever admits he’s wrong, and even worse, often pretends to know more than he does – just the other day making ludicrous claims that $1,000 seats at Yankee Stadium were being sold for three bucks in the online ticket markets.

None of this seems to matter a jot to his legion of devoted followers, who spend hours on hold each day in the hope of getting to talk to their hero. The more fundamentalist among them gather once year at Francesacon, an entire convention held in his honour, a very modern recognition of the special nature of his relationship with his more rabid listeners. These are the ones that keep him top of the ratings, something he also never tires of reminding competitors about.

Now and again, Francesa, for all his overweening arrogance, dripping condescension and juvenile namedropping, will open a show with an extended rant about the topic du jour and there will be brilliance in the raving. The unmistakable sound of an irate man tapping right into his audience’s main vein, capturing the frustrations and anger of every tormented fan. But he’s probably at his best when discussing games and players from days gone by. The death of any icon with New York ties can spawn a sepia-tinted afternoon of warm nostalgia as he and his constituents trawl through the highlight reels in their heads.

When he strays outside his comfort zone the results are usually unintentionally hilarious enough to go viral. His attempts to figure out the chronology of the Star Wars films became a YouTube sensation. Similarly, the day he interrupted his sports chat to cover the election of Pope Francis, like it was the Yankees announcing the signing of a new short stop, was a Patridgeseque masterpiece.

As time has gone on, however, the 62-year-old does sound increasingly like a cranky and rather pompous old man, bristling at the intrusive growth of something like soccer (sawcah!), always stubbornly contending that the older players were better and the long-ago games more true. In this vein, he rails at length and with some justification about the tendency of modern stars to excessively celebrate simple plays. His tirade against the New York Giants’ Odell Beckham Junior on that score back in December was a classic of the genre.

One especially sycophantic interview with the Yankees’ Alex Rodriguez, during which he allowed every single lie go unchallenged, will go down in the broadcast annals as a note perfect rendering of America’s laissez-faire attitude towards performance-enhancing substances. A disaster that might have derailed another career, it simply became part of Francesa lore because his listeners care less about exposing cheats and more about when the Yanks might next win a title.

A man in tune with his audience. As ever.

1 Philip Browne admits funding model for Irish rugby is not sustainable
2 Dave Hannigan: Trump gets the clubs back out as death toll keeps rising
3 Munster braced for worst of financial crisis due to Thomond Park debt
4 Sonia O’Sullivan: How to keep your competitive edge from going blunt
5 Dr Bob Rotella: ‘If you focus only on the target you’ll play darn good golf’
Real news has value SUBSCRIBE