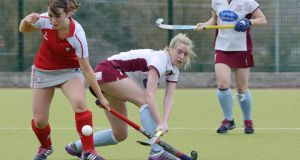 Going in to tomorrow’s final round of Irish Hockey League pool matches, eight clubs still have a chance of securing a place in the semi-finals, with Loreto and Railway Union in pool A and UCD and Ballymoney in pool B the sides currently in pole position.

Only an unlikely combination of results and scorelines would prevent Loreto and UCD from progressing – Loreto would need to lose to bottom-of-the-pool Ulster Elks to find themselves in trouble, while even if UCD lost to Ballymoney, Ards would still need to overturn the students’ goal difference advantage of 12 to leap-frog them.

Barring those eventualities, then, it looks like it will be three clubs in each pool fighting for one qualifying spot, although of that group, the odds are stacked against Old Alexandra. They’re four points behind second-placed Ballymoney, whose goal difference is superior by eight.

In pool A, if Loreto maintain their record as the only unbeaten side in the competition against Elks, then it will be Railway Union, Pegasus and Hermes fighting for the other qualifying spot.

Hermes have to beat Railway at Park Avenue to have any hope of advancing, but would also need Catholic Institute to deny Pegasus a victory in Limerick.

A victory for Railway would guarantee their place in the last four and the chance to defend the title they won last year.