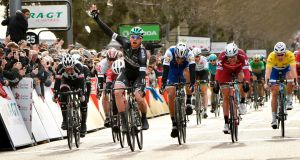 Ireland’s Sam Bennett celebrates as he crosses the finish line, ahead of Norway’s Alexander Kristoff, Germany’s Marcel Kittel and France’s Arnaud Demare at the end of the 190 km third stage of the 75th edition of the Paris-Nice cycling race, between Chablis and Chalon-sur-Saone. Photo: Philippe Lopez/Getty Images

Sam Bennett turned back the clock for Irish cycling on Tuesday, becoming the first from this country to win a stage in Paris-Nice in 28 years. Bennett ended a long wait since Stephen Roche’s victory atop Col d’Eze in 1989, blasting home ahead some of the world’s top sprinters.

Led out by his Bora-hansgrohe team, Bennett was perfectly positioned with 200 metres to go to the line in Chalon-sur-Saône. He ended up in the slipstream of former Tour de France stage winner Alexander Kristoff (Katusha), who launched his sprint but could do nothing about the Irishman when he made his move.

“I was confident in myself,” said Bennett afterwards. “I felt good. I was just waiting for the right opportunity. I stayed focused all day for this final sprint. I’m very fortunate to have won today in Chalon-sur-Saône. We are experiencing a really tough Paris-Nice edition, and the victory is that more beautiful today.”

The result is the biggest of his career, being the first win at the top-ranked WorldTour level. It comes after Bennett changed his training over the winter, eschewing heavy leg work in the gym for on-bike training. He told The Irish Times prior to the start of the season that he would return to his old approach, believing that the indoor strength work he did before the 2016 season simply didn’t transfer to the bike.

Bennett took his earliest-ever season win in January when he took the Race Melbourne event. He was also second in the People’s Choice Classic and third on a stage of the Santos Tour Down Under.

More recently he did a block of high-altitude training in Spain and found that this paid off. He felt strong in the opening two wind-swept days of Paris-Nice, and was involved in much of the action on Monday.

He jokingly referred to those opening stages – days that wreaked havoc in the bunch and saw many riders finish far down – as fun.

“I had a lot of confidence coming into this just from the feeling in my legs,” he said. “I’ve had good form recently, at the Tour Down Under I had the speed but I didn’t get the opportunities.

“I knew with a bit of luck today and the support of my team something was possible.”

The victory will give Bennett confidence for the remainder of the race, although increasingly mountainous terrain suggests that Thursday may be his only other opportunity.

Compatriot Dan Martin will however relish the uphills, having ridden well thus far and remaining close to the ongoing race leader Arnaud Demare (FDJ). He is ninth overall, 23 seconds back. While he may lose time in Wednesday’s 14.5 kilometre time trial, he should advance once again when the terrain gets steeper.

Bennett is 23rd overall, but has already achieved his major objective in the race. Furthermore, in joining Roche and fellow Carrick on Suir native Sean Kelly as stage winners in Paris-Nice, he has underlined his potential.