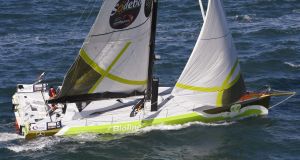 As Ireland prepares for a weekend of high winds and Christmas turkey, spare a thought for single-handed sailor Enda O’Coineen on board Kilcullen Voyager, currently several hundred miles to the south of Tasmania in the Vendee Globe race.

As expected, the non-stop race around the world has been brutal on boats and sailors and, while there has been a steady stream of retirements, thankfully there have been no major injuries or worse.

But the catalogue of incidents keeps growing and O’Coineen is relying on traditional navigation methods and paper charts as both his main and back-up computers are out of action following a horrendous Southern Ocean storm earlier this week.

“This is everything I expected and more before I started the race. It’s the biggest challenge I’ve ever undertaken but I’m determined to keep going,” O’Coineen told The Irish Times on Wednesday.

“I stopped racing for over a day and began heading north towards Perth, just to get everything sorted on board and recover. But I’m not giving up and will only stop if I’m taken out somehow.”

The Galway sailor expects to be past Tasmania by Christmas Day but still has the gruelling South Pacific stage of the race to Cape Horn to contend with. He expects this to take about 10 days to two weeks but once past the infamous headland at the southern end of South America he will have the back of the race broken.

Currently he has sailed about half the distance involved though the rigours of the Southern Ocean are by far the most difficult for the fleet.

The Irish boat has so far exceeded expectations and is currently lying in 13th place although this will improve to 12th shortly as yet another boat ahead is expected to retire due to damage.

“Although I’m very competitive, watching other boats pull out due to damage is not how I want to win,” he said.

Nevertheless, there are eight boats behind him while the leader, Armel Le Cleac’h on Banque Populaire, is expected to enter the South Atlantic on Christmas Eve and begin the climb northwards towards the finish at Les Sables d’Olonnes sometime towards the end of January.

Notwithstanding further damage, O’Coineen and the bulk of the fleet will take longer, expecting to finish in February at the conclusion of a three-month ocean-racing odyssey.

However, if the notion of a three-month single-handed lap of the planet in the notorious Vendee Globe wasn’t already sobering, the 50th anniversary of the original round the world race will be staged in 18 months’ time and O’Coineen’s hoped for feat as Ireland’s first successful Vendee sailor could yet be eclipsed by another solo sailor.

The original Golden Globe non-stop single-handed round the world race saw nine boats start but only one finish and brought to public attention such names as Robin Knox Johnston, the eventual winner, and the sailing novice Chay Blyth as well as Donald Crowhurst who faked his race to eventually die by suicide at sea.

Now Dubliner Gregor McGuckin (30) has officially entered the anniversary race that aims to authentically recreate conditions for the original race in virtually every aspect.

While tinned food was the norm 50 years ago, a concession to allowing freeze-dried food for health and nutritional reasons is permitted. An box containing modern equipment for emergency use only will be allowed on board.

Otherwise, the replica race is expected to take a whopping nine months to complete in the smaller and slower boats.

McGuckin started out in sailing while at college, following his passion for the outdoors. That led to windsurfing, particularly on the west coast where is was working as an instructor for Coláiste Uisce and he reckons the solitary nature of that sport fired his idea for a solo circumnavigation.

More recently he has been working as a professional skipper on a privately-owned Oyster 67 in the Caribbean.

In keeping with the much simpler profile of the 50-year-old race he plans to compete in, instead of a multimillion euro budget of a modern racing boat,

McGuckin needs to raise between €150,000 to €300,000 in sponsorship depending on how competitive he intends to be.