2016 Dublin Marathon - Five ways to break through the wall

Ian O’Riordan has plenty of experience of running marathons. Here’s his advice... 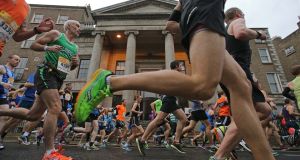 No, I am not running the Dublin Marathon on Sunday.

Yes, I have been asked that question quite a few times this week, but I’ve run enough marathons at this stage - including Dublin - to know there is no easy way of running 26.2 miles, only the sensible way.

And that starts with doing a sensible amount of training (which this year I hadn’t): for those with all that safely secured in the bag by now, it should be all downhill from here. Right?

Well, more or less. As Noel Carroll, one of the Dublin Marathon founders, always said “it’s not the distance that kills, it’s the pace” - and he knew what he was talking about.

For the expected 19,500 runners taking part on Sunday - another record entry for what is the 37th staging of the event - that distance is exactly the same, no matter how fast or slow they intend on completing it.

Conditions won’t be far off ideal, Sunday’s forecast for slack winds, temperatures hovering around 10 degrees with the slight chance of light rain the near perfect ally of the marathon runner.

Still, more than any hitting projected finishing time, simply hitting the finish line is likely to be the main priority of the day for most marathon runners (although ideally in or around some target time).

Indeed it helps to have some of target finishing time, rather than just setting off and hoping for the best. Running at your own pace is therefore vital; it’s also vital to respect the distance, remembering the marathon only really begins around the 20-mile mark, and the oncoming of the infamous “Wall”.

Here are five ways to help you break through that wall -

No. 1: Setting Forth: No one should arrive at the start area at Fitzwilliam Street Upper without time to spare, although that will mean some waiting around. There are four ‘wave’ or staggered starts, beginning at 9am (the wheelchair race is off at 8.50), then 9.10, 9.20 and 9.30

No one should get cold either, which is why wearing an old sweatshirt and hat is a good idea (this can be promptly discarded, just before the start, and are actually recovered for charitable purposes).

No last-minute munching, however. A familiar and preferably light breakfast is best consumed at least two hours before the start, and while staying well hydrated is critical, small, regular sips of water are more effective than large gulps. No new runners or socks either, naturally.

The first station is just after the three-mile mark, and while that might seem a little early to start on water, it’s actually the most critical time.

No. 2: Reaching Halfway: The marathon is not a game of two halves, but rather a race of three thirds, and that first third is getting to halfway.

Patience is the key here, particularly in the early miles. As the race heads towards the quays, over the Liffey and into Stoneybatter, the runners will spread out, and by the time it reaches the Phoenix Park, just after three miles, there will be ample room.

After a long drag up Chesterfield Avenue, onto the Castleknock Road and then back into the Park, there’s another water station at the Chapelizod Gate, and make sure to sip again.

There are 10 water stations in all, providing 140,000 bottles of water, including at the halfway mark, just over Dolphins Barn Bridge. Although even with 13.1 miles done, the next 13.1 are going to feel an awful lot longer.

No. 3: Hitting the Wall: Essentially the human legs can only retain enough muscle glycogen for around 20 miles of steady running, which is why at this point in the race, the whole body wants to stop - or feels like it has hit a wall. It can switch to using other fuels, such a body fat, but it certainly helps to sip on an energy drink, take a shot of an energy gel or chew on a very ripe banana to top up those energy levels.

It’s going to hurt either way, because this is where the marathon turns from prologue to monologue, from the physical to the psychological. It doesn’t help that there’s a notable incline up Milltown Road at this point, too, which is also where the crowd support can be at its most beneficial.

No. 4: Heartbreak Hill: Con Houlihan once described the marathon as a sort of horizontal Mount Everest, although that doesn’t mean there aren’t some hilly parts.

Indeed not long after that incline around Milltown comes another drag up Roebuck Road, approaching the 22-mile mark - now known as Dublin’s version of Heartbreak Hill.

Again, crowd support around here goes a long way towards helping the runners get to the top, although there is the immediate consolation of a left turn onto Fosters Avenue, a lovely gentle downhill to the Stillorgan Road, onto Nutley Lane, and from there a straight-as-an arrow run towards the finish.

No. 5: In Sight of the Finish: This is the most welcome and most wanted part of the course, the long, straight and flat last two miles from Northumberland Road and onto the finish at Merrion Square.

Still, patience is critical. A slightly ill-timed finishing surge could result in a crippling cramp, or worse, so it’s important not to press too hard. Still, not long at all now until that finishing chute comes into sight and with that all the agony of the last few miles is replaced by ecstasy.

Once that finishing line is reached - usually with a string of curse words comes the inevitable desire to lie down for the rest of the day, although it’s important to stretch out a little before reaching for that celebratory beverage of choice. And then another one.

Lastly, of course, good luck. Not that luck has anything to do with it, right?