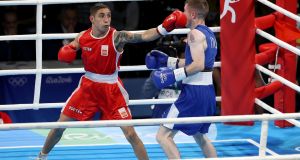 Would you ever have thought there’d be a day when you’d be hollering ‘go on Jonty, ya good thing!’ at your telly screen, or thanking the heavens for bringing the Laser Radial Class and Lightweight Double Sculls in to our lives? The Olympics does that to you, it broadens your sporting passions to anywhere they need to go to numb the pain of seeing Simon Porloe land on his face and Paddy Barnes lose.

A mixed day, then, for the Irish team, the low-point coming in the boxing when Michael Carruth ended Paddy’s Rio dreams.

That may seem a little harsh, Michael owing us nothing after delivering the nation Olympic gold, but as soon as he uttered the line “I want him to get a bit of a test today so it will stand to him later in the competition”, you couldn’t but have a feeling of the sinky kind. Paddy, you feared, was doomed.

It brought back memories of that moment earlier in the summer when ITV’s Mark Pougatch wondered if Roy Hodgson would drop Joe Hart for the Euro 2016 quarter-finals when England were already halfway to losing to Iceland in the last16, Hart and all his team-mates sunning themselves on a beach by the time the quarter-finals came ‘round.

Fate-tempting is a risky business, then, and while Carruth and Bernard Dunne both warned us not to take Samuel Carmona Heredia for granted, and Hugh Cahill reminded us (as if we didn’t know) that his hellish nickname is El Infierno, you still couldn’t but be confident-ish.

Some time later. “Lots of devastation here,” said Joanne Cantwell back in a woebegone studio after that infernal wait to see which fighter’s arm would be raised, our Paddy done and dusted on a split decision.

“Just as well I got beat because I’d have been embarrassed next week,” he told Evanne Ni Chuilinn, as only Paddy can, confirming what it looked like on our telly screens, that his energy was spent after a single round.

It sounded for a second like he was announcing his retirement, but wasn’t, instead suggesting that he’d like to be able to eat a proper meal between now and Tokyo 2020, so he’d no longer be fighting at that scrawny weight.

Joanne might well have been keeping an eye on the tweet machine because some tweeters were suggesting that Paddy’s tweeting habit had all but banjaxed his hopes, these tweeters being authorities, need it be said, on what it takes to win two Olympic medals and to be going for your third. (Richie Sadlier’s take on this was in ‘drop the mic’ territory: “Yep, he definitely lost that fight because he has a Twitter account. That’s exactly how elite sport works”).

“People weren’t saying anything about that when he was winning medals, that’s how he’s always been,” said Bernard, somewhat quashing the notion that taking 10 seconds out of your time to tweet the occasional selfie with a sporting celeb suggests that you’re a ne’er-do-well who deserves Olympic heartbreak. Take the mickey out of a professional golfer in a hoot of a way, and you got what was coming to ya. We’re a funny auld race.

“Muhammed Ali lost, all legends lost, this is boxing,” said head coach Zaur Antia. And the earlier legends hadn’t even 140 characters (or less) to blame for their mishaps.

That was all a bit gutting, then, no more than Simon Porloe’s face-first tumble in the cross-country phase of the eventing thingie, Simon being a horse which only added to the gloom. He didn’t ask to be in Rio, he’d prefer to munching grass in Tipperary. Jonty Evans almost went clear, though, scoring just 22.80 penalties, like we know what that means, Ireland eighth overall at the end of the day. If they can rise five places or more, Ireland will run out of Jonty replica shirts by the end of the week.

Our rowers did grand too, as did Annalise Murphy, RTÉ left morto because they were left without live pics of her triumph in the first of her two races, instead showing Simon Porloe’s four-legged mates doing their thing, and a swimming contest or two.

Circumstances beyond their control. Which is how wonderboy Adam Peaty possibly now regards his Ma and Da’s copious media interviews before and since he won gold and mullered world records. “He was afraid of water, he wouldn’t even sit down in the bath!” So said his Ma, Caroline, in a chat with Clare Balding, explaining why she first took him for lessons, in an effort to overcome his fear. “Ah bless,” said a nation, picturing a tearful Adam bawling as his rubber ducks beckoned him to the deep end. He got over it, though. In some style.

Salah seals the deal as Liverpool see off a dogged Man United 18:39
Connacht huff and puff but Montpellier pull away at the end 18:36
Hockey: Ireland strike late on to claim bronze 17:55
Champions Cup: Leinster meet Saracens and Ulster face Toulouse in quarter-finals 17:13
Here is your handy guide to sport on television this week 17:01