Michael Conlan ‘won every round’ on way to defeat, says Darren O’Neill 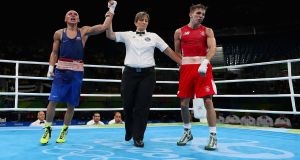 Boxer Michael Conlan (right) shows his disgust as Vladimir Nikitin of Russia is declared the winner in their bantamweight quarter-final in Rio. Photograph: Christian Petersen/Getty Images

The stench of a sporting injustice stank all the way from Rio to the RTÉ studios and beyond. Yet, in a Games that have been rotten in so many ways, there had been a whiff of it in the air beforehand.

Going toe to toe with a Russian certainly comes with plenty of baggage in these Olympics. Never mind the Internationlal Olympic Committee playing down the World Anti-Doping Agency report of state-sponsored doping. More pertinently, in advance of Michael Conlan’s bantamweight quarter-final with the Russian Vladimir Nikitin on Tuesday, there was the Guardian report at the outset of these Games alleging corrupt adjudicating in the Olympic ring.

On Monday, a Russian win in the heavyweight final had left neutral observers incandescent with rage, but this would be as nothing to later.

In any event, RTÉ’s heavyweight boxing panel in the studio were a little queasy. Michael Carruth echoed the views of Bernard Dunne and Mick Dowling in believing Conlan would win the fight, but noted there had been “220 bouts in the Olympics and 56 have been split decisions. That’s enormous and four of them have gone against us.” So far.

All through the pivotal and critical first round, Cahill and O’Neill extolled Conlan’s eminently superior punching, footwork and ring craftsmanship.

Cahill: “A good round for Michael Conlan.”

O’Neill: “For me, he wins that round three-nil across the board, Hugh.”

The scorecard flashes on to the screen, showing 10-nine across the board. To Nikitin. 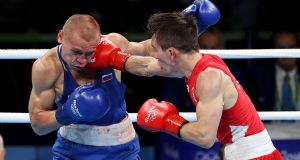 Cahill: “Ten-nine to Nikitin. What?”

“What are they watching?” implores Cahill, repeating the question.

The second round. Conlan now has to go toe to toe with the Russian. “After outboxing him in the first round, now he’s outfighting him,” said O’Neill.

Cahill says: “Conlan has to get this round, Darren.” O’Neill agrees, but daren’t call anything now.

“He’s got it on all three,” says Cahill with relief.

The third round is more of a slugfest. Their eyes tell them Conlan is winning it. When it’s done, O’Neill adds: “For me, he won every round, Hugh. I don’t know how they could even consider giving that against him.”

But, of course, they do.

A crestfallen Dowling says: “I can’t for the life of me understand how Michael lost that.”

Back to Conlan at ringside, for neither can he: “AIBA [the International Boxing Association] are cheats. They’re f**king cheats. As simple as that. That’s me [done]. I’ll never box for AIBA again. They’re cheating bastards. They’re paying everybody. I don’t give a f**k if I’m cursing on TV. I came here to win the Olympic gold. My dreams have been shattered now. But do you know what? I’ve a big career ahead of me. And these ’uns? They’re known for being cheats. They’ve always been cheats. Amateur boxing stinks. From the core right to the top.

“Like Katie [Taylor] yesterday. No way she lost that fight. It was a close fight, but she didn’t lose. I thought I boxed the ears off him in the first round, and the scoring went against me, so I had to go to his feet, which I did. I outfought him.

“I’m probably just blabbering on, but I’m gutted. From the bottom of my heart I wanted to go back with a gold medal to Ireland. Now I feel I’m going back a loser. I’m not a loser, I’m a winner, and today just showed how corrupt this organisation is.”

Carruth described it as “an absolute disgrace”. There was a long, if largely fruitless, debate about what can be done. “I don’t know what the answer is today, but something has to be done,” said Carruth.

Carruth was convinced Conlan has a huge pro career ahead of him. It says everything about amateur Olympic boxing that it makes professional boxing appear pristine clean.