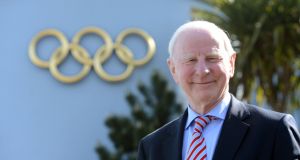 Pat Hickey, former president of the Olympic Council of Ireland, has been granted his passport back by a Brazilian judge so he can leave Brazil for medical treatment. Photograph: Alan Betson

The Olympic Council of Ireland (OCI) has said it will not pay the €400,000-plus bond which its former president Pat Hickey is required to lodge in court to be allowed to leave Brazil on medical grounds.

A court in Rio de Janeiro ruled Mr Hickey’s passport should be returned to him and that he can leave Brazil on condition he put up a bond of 1.5 million Brazilian Reals (€410,000).

It comes three months after his arrest in Rio for alleged ticket-touting, at which point he temporarily stepped aside from his position as president of the OCI.

An OCI spokesman said the bail bond was a personal matter for Mr Hickey.

The decision was taken by OCI acting president Willie O’Brien.

The OCI is currently paying Mr Hickey’s legal fees. This is understood to be due to a stipulation in the organisation’s articles of association that oblige it to pay the legal costs of staff members who run into difficulty during the course of their duties.

Senior management at the OCI held a discussion on Thursday as to whether a bail bond could be considered a legal expense before concluding it could not.

Another avenue open to Mr Hickey in terms of securing the bond is the International Olympic Committee.

On Wednesday, Justice Juliana Leal de Melo of the Special Court for Supporters and Large Events in Rio de Janeiro, which had jurisdiction during the Olympic and Paralympic Games, ruled that Mr Hickey can be allowed to leave Brazil.

The judge acknowledged the possibility Mr Hickey may not return to Brazil to face court proceedings, but said this needed to be measured against his need for medical attention, identified on the day of his arrest.

Arthur Lavigne, senior counsel on Mr Hickey’s legal team, said on Thursday morning in Rio it was too early to comment on the judge’s decision, and that it was not yet clear who would put forward the bond required to allow Mr Hickey’s return to Ireland.

In Bangu maximum security prison, Mr Hickey shared a cell with Kevin Mallon, an employee of ticketing agency THG, who was arrested on ticket touting allegations during the August games.

Mr Mallon’s legal team will meet the judge responsible for the ticket touting case in Rio de Janeiro in the coming days to reiterate a request for the return of his passport.

Justice Juliana Leal de Melo said Mr Hickey leaving Brazil for medical treatment should not “prejudice in any way the regular pursuance” of the case, and that the “presence of the defendant in all steps of the process” should be guaranteed.

There was no mention in the judge’s decision on Wednesday of the return of Mr Mallon’s passport, but the latter’s legal team said this was not of concern to them.

Sao Paulo-based lawyer Franklin Gomes said the judge had not yet considered his plea to allow Mr Mallon to leave Brazil. Mr Gomes will travel to Rio in the coming days to speak personally to the judge.

In his decision, Justice Leal de Melo denied a request to have the process against Mr Hickey and Mr Mallon dropped for a “lack of just cause” and due to the “ineptitude” of the initial process, as was claimed by the legal teams, negating further claims that the charges against the two Irish men and eight other defendants are “generic” and not precise in nature.

“The facts narrated in the charges, whether they occurred or not, which will be subject to exacting instruction, constitute crimes,” she said, adding: “I reject claims for an injunction to reject charges and summarily absolve [the accused].”

In a separate case taken by Mr Mallon’s lawyers to the Sixth Criminal Court in Rio de Janeiro, Justice Fernando Antonio de Almeida was told Mr Mallon had been the victim of an “abuse of the right to accuse”, and that the THG accountant had suffered “irreparable damage” due to events in recent months in Brazil.

Justice de Almeida was one of two judges who opted to drop the case against Raymond Whelan, the Fifa ticket agent arrested on alleged touting charges during the World Cup in Brazil two years ago.

Mr Gomes said he was confident of a positive response in Rio, but that if this was not forthcoming he would appeal to the higher courts in Brasilia.

It was the Supreme Court in Brasilia that granted Mr Mallon’s release from prison on bail when requests failed locally in Rio.

Citing the public prosecutor’s account of the ticket touting case, Mr Gomes told Justice de Almeida the sale of all hospitality packages for the Olympics was conducted outside of Brazil, and was “absolutely legal”, adding that games tickets were not included in packages sold.

Mr Gomes insisted his client was innocent of all charges, which include ticket touting, money laundering, larceny, criminal association, and ambush marketing.