Logic screams Dublin but impulse to pick Mayo goes beyond that 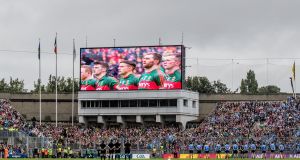 The national anthem is played ahead of the drawn All-Ireland football final in September. Photograph: James Crombie/Inpho

Imagine, so, the scene across Mayo on Friday morning, the last sun of September not fully risen over the gridlocked commuter sprawl of the Bangor-Erris freeway or over the i-podded morning joggers along the Carrowbeg in Westport or the tens of thousands of homes caught in the morning school rush; the whoops in the factory canteens of Castlebar or the gossip in the dining room of the Downhill Hotel and see Paddy Prendergast nodding over the morning coffee down in his home in Tralee when, on RTÉ’s Morning Ireland radio show comes a Kerry voice with a slow, lilting but crystal clear prediction that Sam Maguire “might be heading West tomorrow night”.

The old county must have stopped in its tracks for that second. This wasn’t from a meaningless source: this was Kerry’s Tomás Ó Sé declaring his belief in Mayo; the same Ó Sé who, as a marauding wing back, had been one of the instigators-in-chief of Mayo’s very worst All-Ireland final day-mares in 2004 and 2006.

This was one of the Kerry men who had witnessed up close the effect of the eviscerating heat of All-Ireland expectation can have on Mayo football players.

And here he was, on the national airwaves no less, admitting he could see it, the whole mad bloody carnival heading for the plains with the big silver cup in possession. A county liberated and understandably at a loss as to how to handle it all.

Mayo supporters have gone to Dublin for All-Irelands with an impressive arsenal of psychological tools required to cope with losing. But has any Mayo supporter even vaguely steeled themselves against the consequences of winning tonight?

It was significant that Ó Sé didn’t mention Mayo by name in his clinching line: it was the articulation of a general vision– a vague green and red bolt of ecstasy headed west – which native football supporters have learned through bitter experience to suppress and keep to the margins of their minds.

The easy and safe thing for any of the ex-boys of summer who have moved on to the broadcast booths is to advise a probable win for Dublin. The generally observed point about the All-Ireland champions is beyond any reasonable doubt: they will play better than they did in the drawn game. Their qualities have been lauded so often that even the dogs can recite them.

But perhaps the Dublin quality least cited is the most important. They despise not winning. Since 2011, they have developed the mindset common to all habitual champions. Their flinty composure in the crucial minutes of big games has become accepted as fact. So it would be easier and arguably smarter to offer plaudits to Mayo while predicting that the Dubs will edge it.

But one of the many intriguing elements of this replay has been the stark divide it has brought about between rationalists and those who go with impulse and instinct. All the arguments based on Dublin winning are founded on the reliability of their form line as champions: their consistent ability to produce performances which have sometimes obliterated the morale of other teams and, for the last three years, have produced an overwhelming percentage of wins. The basis for believing in a Dublin win is predicated on their doing what they do.

The basis for believing in a Mayo win is based more on a feeling – that they might be about to do what no Mayo team has managed since the year that Dr Noel Browne resigned his seat; since The Catcher in the Rye was first published; since Bobby Thomson hit his home run in the Polo Grounds; since Enda Kenny was born. Predicting that Mayo are going to win requires a leap of faith.

And that, of course, harks back to 1989, when this All-Ireland odyssey really began and John O’Mahony, Mayo’s manager, kept telling people to “keep the faith” once the excitement began to go off the charts. It became a mantra in the following decades.

Keep the faith. But who did, as the big-day losses began to accumulate? Even if you take it as read that the there has been nothing mythical or fateful about each of Mayo’s All-Ireland defeats – that those Mayo teams happened to encounter teams that were sometimes marginally or sometimes majorly better – who has, beyond whatever team was in the dressing room, travelled to see Mayo play All-Ireland finals in a state of true optimism?

So much of the pressure is on the Dublin team this evening. They are not so much expected as obliged to click into the beautiful monster role, dominating the field with their swift, expansive attacking football and their athleticism and their collective self-belief.

The demand for a return to that form has been insistent in the fortnight since the replay. It overlooks the fact that the Dubs went out in the drawn match fully intent on giving just that performance. For whatever reason, it didn’t happen. The general presumption that it will happen automatically this time around contains its own pressures. And it implies a kind of acquiescence from Mayo: that the challengers accept the theory that their best chance has already passed.

Maybe it is true that previous Mayo teams flattered to deceive. There is rarely a summer when they don’t look good; when they don’t catch the eye. This crowd is different. When he was chatting with the Second Captains team, Mike Quirke said he felt that if some Mayo forward could do something “mad” and go kick 0-4, then he had a feeling it could be a famous day. Paul Galvin has also gone on record to say that he saw something in Mayo in the draw that made him believe.

Maybe this is just Kerry shamanism: Kingdom men willing themselves to believe in any alternative to a GAA world coloured sky blue; Dublin brilliance confirmed and more to come.

But maybe it comes down to the more prosaic and genuine belief that all Mayo people on their way to the city this morning or watching in London or Chi- cargo are going to have to confront before throw-in at five o’clock: that this time they have a team that’s good enough. In an odd way, there is no pressure on Mayo because if their team loses, then nobody will be surprised because, well, that’s what is supposed to happen.

Until, of course, the day comes that it doesn’t. After the decades of talk about some magical September, it would take Mayo to end this thing in October.

Two teams left standing, then, and a 70-minute wormhole between Mayo and that other place. Before they dive in, they should allow themselves to think about what the world – or the parts of it named Swinford, Foxford, Toormakeady etc – might be like by seven o’clock tonight, on the other side of it.

1 Man United close to €100m deal with Dortmund after Jadon Sancho agrees terms
2 Gerry Thornley: Irish system to face its acid test in front-loaded return
3 ‘Worst two days of my snooker years’ - Shaun Murphy exits the Crucible
4 Uefa alter penalty law for goalkeepers coming off their line
5 Sporting Cathedrals: Cheltenham reveals all about the wonder of racing
Real news has value SUBSCRIBE
Here is your handy guide to sport on television this week