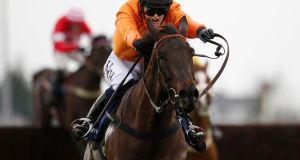 Lizzie Kelly became the first woman in Britain to win a Grade One jumps race when coming first at Feltham on Tea For Two. Photograph: Alan Crowhurst/Getty Images.

Christmas racing is like Christmas eating – there’s so much of it that after a while, it becomes difficult to remember exactly what you enjoyed or when you enjoyed it or even what state you were in at the time.

Kempton was, if you can believe it, only last Saturday. Remember? The best King George in years? Faugheen? Douvan in Leopardstown? Exactly. Feels like it was about three Cheltenhams ago.

It would be easy, then, to gloss over the piece of history made by English jockey Lizzie Kelly that afternoon, much in the way you might not be 100 per cent certain whether it was your second or third dessert on Christmas Day that really hit the spot. But long after we’re all in the ground, Kelly’s achievement in becoming the first women in Britain ever to win a Grade One jumps race will endure.

In piloting Tea For Two to victory in the Feltham Novices Chase, Kelly carved out a special corner of sporting history for herself. It has taken all of 40 years – previous to 1976, women weren’t even allowed to compete over jumps – but when it came it was worth the wait.

Anyone interested in what pure joy sounds like ought to do a search for “Lizzie Kelly Jockeycam” and glory in the last two fences in particular, as Kelly realises this is about to happen and promptly screams the place down.

Kelly is 22 years old, with a career that is very obviously on the up. She is the only female jockey in the top 50 of the standings in Britain and has reduced her seven-pound claim to five over the past year.

Tea For Two is a family horse – owned by her mother Jane, trained by her stepfather Nick Williams – and one that could conceivably carry Kelly to even greater things in the future.

This, after all, was the race won last Christmas by Coneygree, the eventual Cheltenham Gold Cup hero. That won’t be Tea For Two’s chosen route – at least not this season – but there must be a decent chance we’ll see Kelly at Punchestown come the spring, where she could very well repeat her Grade One trick and be the first woman do so on an Irish track into the bargain.

“I’m not a bra-swinger, by any means. I always think that people should put the hard work in. I’ve worked in racing since I was 14 years old, I’ve put my summer holidays and Christmas holidays on the line and not had them and worked for people. And more people should probably do that.”

Since a jockey is only ever as good as the horses she (or he) gets to ride, Kelly has had to be proactive. One of those holidays she talks of was spent in Co Carlow, working for Willie Mullins. Not wanting to become known for getting rides solely on the basis of being the trainer’s step-daughter, she branched out of Williams’s yard last year and has won races for Neil King. It’s hard to even take a guess at where she might find her level.

“The lads are just stronger, better,” she said.

There’s little doubt it reflects conventional thinking in racing – Kelly is only the second female jockey after Nina Carberry to even ride in a Grade One in Britain this season and not a single female jockey has ridden in any of the 13 Irish Grade Ones so far. But equally, all it takes is for a Lizzie Kelly to come along and minds start changing.

“I think it probably just shows that it can be done,” she said after her Feltham win. “When I was looking at Nina when I was growing up, I just thought that if she can do it, so can I. I wasn’t put off by her success or think: ‘Oh, she’s got so many more chances than I ever could.’ I didn’t think like that.

“And I was obsessed. I was absolutely obsessed as a kid about riding and looking stylish and I used to practice doing interviews on the horses on the way back down from the gallops. I think you have to have a little bit of that about you. So if I can do it, so can everybody else.”