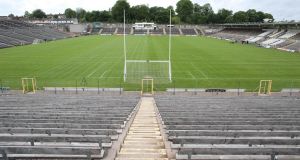 In the league, St Tiernach’s Park in Clones is different. The house is open . . . the stewards are so chilled that they all but affect a Jamaican patois in their welcome. Photograph: Andrew Paton/Inpho/Presseye

And here it comes, bless its tattered soul: the league, the league, the league. Across the Atlantic, they are under the delusion that the NFL is a theatre filled with chisel-jawed quarterbacks, acrobatic cheerleaders and ultra-violence: the American dream divided into four quarters.

Try selling that to the Roscommon-Monaghan crowd courteously sharing the MiWadi in the Abbey as they gather for the noontime carvery. Try bringing up Cam Newton or Tom Brady to your neighbour in Croke Park if Dublin are trailing Kerry by two tonight and see what kind of comeback you get. No, as January turns to February in Ireland, the NFL can only mean the arrival of a new GAA league season and with it all the promises and vanities of the year ahead.

The league is a bit like the family mongrel given to long-term disappearances: nobody realises it is gone until it shows up on the doorstep again. There has never been a time when the GAA as an entity has been in agreement about how it feels about the league. All that anyone is prepared to say with conviction is that it is not as important as the championship.

Because of that, it is a perpetual source of wild debate and prone to the kind of questions that should really be levelled at the major political parties. Is it any use? Would we be better off without it? Has it not gone a bit stale?

But the true purpose and value of the league is never as clear as it is during this week, when the ‘build-up’ begins in earnest. Travel through greater Connacht or the Gael-strongholds of Munster or even the GAA super-club suburbs of Dublin and you can feel it: a kind of brimming tension and trapped energy created by tens of thousands of Irish people cooped up through the Christmas holidays and into the monsoon season that has been 2016.

They need a bit of a release. And so the league: here is a means by which the average Irish man and woman can legitimately pull on a raincoat, drive through hostile weather, park on double-yellows and then stand in the rain for the afternoon going berserk about the shortcomings of the nouveau full back line which the county manager has selected.

They howl blissfully at the moon – which is often in the sky by four o’clock. Then they drive home again feeling great.

In Argentina, they have reams of Lacanian psychoanalysts available for $$$$ per hour to help them keep their noggins on the straight and narrow.

In Ireland, we offer Meath v Armagh in Páirc Tailteann, all for 10 notes in the covered stand. Make no mistake, the league is not about relegation or promotion. At its heart, the GAA’s national football league is the biggest gathering of primal scream therapy anywhere in the world. The league is preserving Ireland’s sanity.

The odd thing is that while everyone knows it is not that important in the greater scheme of things, it can take on a ferocious significance on any given Sunday. So the atmosphere is both unusually laid-back and hyper-ventilated. For instance, if you roll up to St Tiernach’s Park, Clones on a big championship summer Sunday, then you better have your papers in order. You’d better not be faffing around looking for a ticket or trying to get the mother-in-law in for free. The gates of Clones on championship day are manned by Navy-Seals-On-A-Career-Break-type dudes. Not to be messed with. In the league, though, it is different. The house is open. Sure, there is a cursory fee at the turnstile but the stewards are so chilled that they all but affect a Jamaican patois in their welcome.

Because they know the league for what it is: a pleasant-valley Sunday free of all the hassles of the All-Ireland championship. Parking is never a problem. There is never a queue for the facilities. The tea tastes delicious and the Kit-Kats never melt. If you pick the right match, you can let the children ‘run free’ along the terraces without the man on the tannoy announcing your darling’s name and telling the whole county you’ve lost them.

The league takes its constituents on a tour of towns they may never otherwise have an opportunity to visit. One league stalwart of my acquaintance still turns tearful when recalling a return journey from the Lough-Donegal Division Two playoff final played in Breffni Park in the boomtime spring of 2006.

At its heart, the league is a trippy kind of character; indifferent to publicity and more comfortable in its skin than the All-Ireland championship. It brings out the same spirit in its participants. For instance, two of the competing online headlines yesterday were: ‘Stephen Hawking: Humanity is going to use science and technology to wipe itself out’ and ‘Kingdom name experimental side’.

Now, there is no doubt that the imminent end of the human race via the very subjects our secondary schools are plugging like demons is a serious issue.

But who can resist the click-bait of the ‘experimental’ GAA line up? It conjures up the irresistible idea of a team chosen over a large spliff, late at night, with the Floyd at full volume on the stadium sound system. And as a headline, it makes anything seem possible. So league fans were drawn irresistibly and shamefully towards the GAA headline.

You can wager there will be a few mad, mad days in the league: rows over nothing and over-wrought supporters and nail-biting relegation days and managers under pressure. You can bank on one or two wonderfully carefree and entertaining games of football and several results without rhyme or reason. In its own way, the league is everything that the All-Ireland championship wants to be in that it has the power to leave everyone guessing.

But it will always be defined by the very fact that it is not the championship and when it is over both the winners and the relegated will go to pains to remind their public of the most reliable cliché: nobody remembers who won the league in the summer. And that’s probably true.

But as the whole charade kicks off again, who would be without it?

1 Sideline Cut: Vignette shows why Bird is the true shark in The Last Dance
2 Anfield and Cheltenham show sports again lacking in looking after their own
3 Federer named highest paid athlete of 2020 as Covid knocks Messi off top spot
4 Liverpool and Everton to oppose plans to play games at neutral venues
5 Brendan Rodgers says he was ‘really knocked’ by coronavirus
Real news has value SUBSCRIBE