Ian O’Riordan: Some drugs in cycling are a matter of life and death 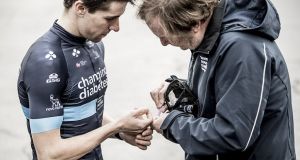 The first injections usually take place is the privacy of the team bus, each of the riders knowing the right spot between their jersey and shorts, the needle softly piercing their preciously thin layer of body fat.

Every dose is carefully measured and administered, and by the time they join the peloton it will already be having the desired effect. If they all ride smartly there’s no reason it can’t be another good day in the saddle.

Fear not the obvious. This isn’t another secret confession of a doper, but the everyday reality for Irish cycling professional Stephen Clancy. And it has been in the now six years since he was diagnosed with type 1 diabetes, a lifelong condition which left him dependent on daily injections of insulin and could be fatal if left untreated.

It is the same with all 16 riders on his UCI pro continental Team Novo Nordisk, which was set up for the sole purpose of proving that diabetes diagnosis and insulin injections don’t have to be a barrier against competing in elite sport. Not as long as you have your therapeutic use exemption (TUE).

So Clancy is telling me this not as any sort of admission. There’s a lot of talk these days about the legitimacy of the TUE, not just in cycling, and he wants to clear up some of the confusion: it’s one thing to suspect a rider of abusing a TUE, it’s something else completely when lives depend on it.

Worse still is that uninformed suggestion that sport needs to get rid of them altogether. “For me, with type 1 diabetes, trying to ride without taking insulin would be a life-threatening situation. And the reality is if I take too much or too little it’s not going to be a happy ending. It’s to keep me alive, not to go after any marginal gains.

“So it does make me angry to hear about how some riders might be abusing a TUE, trying to get a free pass that may be performance enhancing. Especially one of these emergency TUEs during a race. Thankfully I think the numbers of TUEs are in decline, but the goal isn’t to reach zero. Without my TUE I wouldn’t be riding. Simple as that.”

Clancy’s TUE covers both insulin (which is on the Wada banned list as a hormone and metabolic modulators as it can be abused to improve muscle function), and the method of injection (given cycling’s no-needle policy). The reality is he would much rather go without either, not only because of the inconvenience, but given the real risks that come with being diagnosed with type 1 diabetes in the first place.

He was 19 years old at time, coming off the back of the 2011 season when he was named Domestic Cyclist of the Year by Cycling Ireland, already used to 100-mile daily rides around his home in Limerick.

In March 2012, at an Irish under-23 training camp, after his weight loss, muscle cramping, and frequent urination had become more pronounced, Irish coach Paddy Doran recommended routine blood tests. Within two weeks Clancy was diagnosed with type 1 diabetes. No warning, no genetic disposition, no cure.

“I remember the first thing I was told was how to inject myself, then all the jobs I couldn’t do. Like a pilot, or a bus driver. Then I asked the doctor about my cycling, and he said I could probably ride for a mile. That was the real shock when I was trying to make a career out of cycling.

“So I went home and rode for an hour on the indoor bike just to prove something to myself, but certainly thinking my pro chances were over.”

At the time Clancy was also studying PE and maths at the University of Limerick, but before surrendering to that career he recalled hearing about a new all-diabetic pro-cycling team in the US. It was then known as Team Type 1, co-founded by Phil Southerland, himself diagnosed with type 1 diabetes at age one. His mother had been told he would either be dead or blind by age 20, but he went on to ride pro.

“At first I just reached out to them, to get some advice, and a handle on riding with diabetes. It turned out they were looking for riders. I went over to join the development squad, and ended with a two-year contract. The team has a clear mission statement – diabetes doesn’t have to hold you back – and it’s actually given me the opportunity to ride pro.”

Now based in Barcelona in his sixth season with Team Novo Nordisk (the Danish pharmaceutical giant specialising in diabetes medication), Clancy is confident he has got a handle on his diabetes. It can require 10-15 injections of insulin a day, depending on the demands of the ride. A glucose monitor provides a live reading of his blood sugar levels.

An extra injection or two would provide no advantage whatsoever, because all his insulin does is control an otherwise serious medical condition, which is what TUEs where designed for in the first place.

Which is also why like a lot of people Clancy gets understandably miffed every time he reads about Chris Froome, and whether or not he should be allowed ride in the Giro d’Italia and Tour de France when his doctors and lawyers still can’t explain how his levels of salbutamol were twice the permitted amount, for one day only, in last year’s Vuelta a España.

Or when Bradley Wiggins tries to explain his sudden need for triamcinolone, a powerful corticosteroid better known for its fat-burning properties, when preparing for his 2012 Tour win.

Because for Clancy the issue of a TUE has always been black and white – or a matter of life and death.