Ian O’Riordan: Let’s not give up on the Olympic dream

Dark shadows are being cast over Rio, but there’s still something magical about the Olympic Games 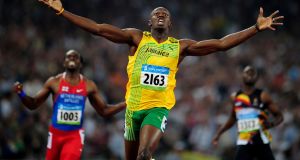 Usain Bolt will be back on the track in Rio for his third Olympics. Photograph: Dylan Martinez/Reuters

Con Houlihan always told me to be careful of the day you start plagiarising from yourself. Just don’t make it obvious, he’d say, perfectly aware this was the fate of most writers, even the great ones such as himself.

Although that’s the feeling, right now, as if stealing from my own reasons for still believing in the Olympics. It doesn’t get any easier as these four-year cycles complete their spin and it’s impossible to avoid or to ignore some of the dark shadows being cast over Rio.

But haven’t we all been here before?

Like in Athens in 2004, when all the fuss about the heat and the dust and the incomplete venues disappeared the moment Michael Phelps first came through the mixed zone, walking like a giant prehistoric amphibian on land, or at least the most incredible athletic specimen my eyes had ever seen.

Phelps was 19 years old and had just won his first gold medal in the 400m individual medley, with a world record to boot.

Two days later, Phelps could only manage a bronze medal in the 200m freestyle, behind Ian Thorpe of Australia and Pieter van den Hoogenband from the Netherlands. “How can I be disappointed?” he declared, immediately afterwards. “I just swam in a field with the two fastest freestylers of all time.”

“What about Phelps, will we ever see his likes again?” I remember Keith Duggan asking me, as we sipped from a bottle of Mythos on our hotel balcony overlooking Syntagma Square, each of us feeling at the centre of the entire sporting universe.

Or like in Beijing in 2008, when all the fears about the smog and the transport and the limited internet connections disappeared the moment Usain Bolt walked into the press conference room, about an hour after winning the 100m in a world record of 9.69 seconds.

“He’s just a freak of nature, isn’t he?” I remember Vincent Hogan asking me, over a few bottles of Tsingtao in the small bar behind our Hotel Tibet, both of us feeling like witnesses to some giant leap in sporting evolution.

Or like in London in 2012, when all the talk about the tight security and the empty seats and the massive queues for the underground disappeared the moment David Rudisha crossed the line in the 800m final in a time of 1:40.91.

To run a world record like that, essentially from the gun to tape, takes the breath away in every sense, and even by their own historically high standards no Kenyan athlete had ever produced a performance quite like it.

“Could Rudisha be one of the greatest ever?” I remember Johnny Watterson asking me, over a pint of Peroni in the only bar we could find next to our apartment near Canary Wharf, both us feeling for sure these Olympics were already something special.

That was also a few days after Con Houlihan had died, in Dublin, at the age of 86. Most nights inside that London Olympic Stadium, between the shattering roars and gold medal salutes, all delivered in deafening surround sound, it was hard to think straight, and hard as well not to think about Con, and some of the other things he told me.

We never shared a drink in Mulligans, and certainly not a liking for navy blue anoraks, but we did share some sort of fascination with the Olympics . . . the inherent beauty of it all, the equal celebration of both men and women in the sporting arena. The last thing he said to me, before London, was to never lose sight of at least some of that.

Four years on, it seems a lot of people have lost sight of that, for their own inherent reasons, yet still some of us can’t help but be drawn back into that arena.

Like Phelps – back in the pool for his fifth Olympics, looking to add to his record tally of 22 medals, including 18 gold. At the age of 31, Phelps doesn’t need to be in Rio, but try tell him otherwise as he chases three more individual gold medals, and possibly another in the relay.

Like Bolt, back on the track for his third Olympics, poised to become the first man to win all three sprint titles for the third time in succession.

As he approaches 30, these will surely be his last Games, but quite possibly his most challenging too.

Fight to the finish

Still it is hopeless to predict the outcome of those events in Rio over the coming weeks, because for all the faults of the modern Olympics, they still have the capacity to produce something utterly unscripted, with very little scope to even think about plagiarising from yourself.

1 Germany well ahead of the curve as Bundesliga gears up for return to action
2 My favourite sporting moment: Roscommon minors restore pride to a county
3 Stephen Kenny: ‘I want people to come and look forward to watching this team’
4 America at Large: Hurling fan Dowling leading the fight against Covid-19
5 Nicolas Roche: ‘For me the Tour in August could be a very good thing’
Real news has value SUBSCRIBE

Stephen Kenny: ‘I want people to come and look forward to watching this team’ 16:33
Nicolas Roche: ‘For me the Tour in August could be a very good thing’ 15:48
Germany well ahead of the curve as Bundesliga gears up for return to action 15:28
Alex Ferguson pays tribute to ‘magnificent’ NHS 13:06
Spectator sues Tiger Woods and his caddie over incident in 2018 11:33