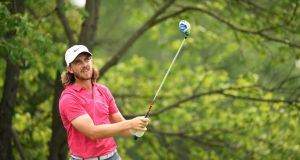 Red faces were the order of the day at the European Tour before the final major of the year – the US PGA Championship – after it emerged winnings due to Tommy Fleetwood for a 12th-placed finish at The Open were paid to another individual. Thomas Fleetwood, a teaching professional based in Florida, was astonished to see $154,480 (€133,000) deposited in his bank account this week.

Despite the R&A running the Open, the European and PGA Tours control prize payments to players. “This was a clerical error which we are resolving and we apologise for the inconvenience caused to both parties,” said the European Tour.

The world number 11 saw the amusing side of the mistake. “I honestly didn’t know anything about it,” Fleetwood said. “I wouldn’t even know if I’d been paid or not because I don’t really look. It looks pretty genuine and they are looking into it and I’m sure they’ll feel pretty bad about it. It’s a funny story.”

The other Fleetwood – born in 1959 – has tried to qualify for seniors events in Europe in the recent past. His friend Greg Thorner, himself a teaching pro, posted a screenshot of bank transactions on social media, with the six-figure payment alongside a Walmart bill for $14.37. The pair had been together when Fleetwood realised his supposed windfall. Thorner said: “He called it up [ON HIS PHONE]and looked at his statement, and that’s when he shouted ‘Holy smoke, I’ve just had $154,000 paid into my account.’

No joke, a friend received Tommy Fleetwood's Open Championship winnings in his bank account last weekend!! They have the same name and he was a PGA pro but still, how does this happen? Didn't believe him until I saw it...good thing he is an honest guy! pic.twitter.com/bE534xfYDV

“He got on to his bank immediately and they didn’t know what to say. That’s when I realised that it must be for the other Tommy Fleetwood and I quickly worked out that it was his Open winnings.

“I think what happened was that he played some Challenge Tour events on the European Tour back in the day and they must still have his details on file. At least he can always say he won $150,000 at the Open.”

Tommy Fleetwood has goals of an altogether bigger prize this week in St Louis. He has contended in the past two majors, adding to the growing sense that he will prevail in one before too long. “Since I’ve been playing well and particularly since I’ve been playing well in the majors, I tend to look at them more and I have a sense of confidence and belief that I totally can get over the line and win one,” he said. “It’s part of the plan and it’s part of my career, well, hopefully, to have a couple of majors by the end of my career when I’m done.”

Justin Rose’s hopes of adding what would be a second major title to his CV have been blunted by a back problem. The world number 3 withdrew from last week’s WGC Bridgestone Invitational and has not been able to play any warm-up holes at Bellerive as he protects his back before a first round afternoon tee time alongside Jordan Spieth and Jon Rahm.

“I wouldn’t say there’s any injury per se,” he said. “It’s just one of those things. I just had a facet joint tighten up. I could have maybe persevered last week if it was the last event of the season or something like that but just with what’s coming up this week, with the FedExCup, with the Ryder Cup on the back end, it just wasn’t the prudent decision to play through. Even this week, I haven’t actually played a practice round in terms of going out there with my golf clubs. I have walked each nine and got some good visuals.

“I hit some balls today and felt absolutely fine and really comfortable with my swing and the way it’s moving. So it’s been a slightly different preparation for me this week because of it, but it’s all been about trying to be ready for Thursday.”