Who are the ones to watch at this year’s US Masters in Augusta?

From the obvious contenders to the rank outsiders, here are five of the hottest tickets 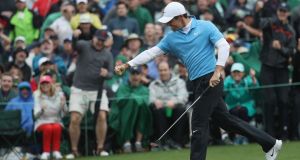 The pre-tournament favourite (again!), McIlroy is the hottest player on the planet (again!!) so far this season. Has some scar tissue from past tussles with Augusta, but comes in his game in terrific shape and has tailored his schedule to ensure this latest tilt at the Grand Slam will reap dividends. His putting has improved this season but it is his driver which can ensure that his power game can take advantage of the Par 5s.
Form (last 5): 4-2-6-1-9
Betting: 13/2

Hard to believe that the self-taught prodigy – some 10 years into his professional career – has yet to win a Major. Could we finally see him make the breakthrough here? Fowler has finished runner-up in three of the four Majors (the Masters, the US Open and the British Open) and third in the other (the US PGA). He has knocked on the door without ever getting an answer. A runner-up to Patrick Reed last year, Fowler was also a 54-hole leader in 2017 and has top-12 finishes in four of the last five years.
Form: 1-36-2-40-47
Betting: 16/1

A winner of the green jacket in 2013, Scott knows how to close the deal, and, having fallen to 73rd in the world rankings last summer, he has been upward-trending this season with a series of good performances. A win has evaded him (with a tied-second in the Farmers Insurance his best finish) but the Australian’s form and course know-how should see him feature at the business end of proceedings.
Form: 2-61-7-MC-12
Betting: 30/1

Lefty (the other one!)

Without a win on tour since the Travelers last season and with only two top-10s so far this season in nine appearances, Watson hasn’t exactly set the world on fire. And yet . . . and yet!! There is something that changes about the creative left-hander once he shows up at Augusta National, where the formbook goes out the window. He was a winner in 2012 and again in 2014; a third green jacket would guarantee some old-fashioned tears in the Butler Cabin.
Form: 27-17-56-4-40
Betting: 30/1

Could someone finally assume the mantle of Fuzzy Zoeller? Zoeller – in 1979 – was the last debutant to win the Masters, but Harding is an up-and-coming player with plenty of game. The South African has amassed five tournament wins worldwide in the past year and shot up the world rankings to claim an exemption into the Masters. He has all the odds stacked against him. Not only is it is his first Masters appearance, it is his first appearance in any Major.
Form: 26-MC-1-2-17
Betting: 250/1

1 Seán O’Brien: Anger over my parents’ break-up never left me
2 Gibson-Park, Earls and Kelleher all in race to make Ireland’s French finale
3 Madness or defiance? The GAA is taking a huge gamble in staging Championships
4 Peter O’Mahony ready to battle his way back into Ireland’s backrow
5 Ireland 50 Italy 17: Ireland player ratings
Real news has value SUBSCRIBE

Alisson: ‘I believe my faith and working hard helped me in this fast recovery’ 18:21
Gibson-Park, Earls and Kelleher all in race to make Ireland’s French finale 17:24
Champers Elysees to skip Breeders’ Cup with Royal Ascot next year’s target 16:03
Peter O’Mahony ready to battle his way back into Ireland’s backrow 15:46
Willie Mullins ‘pleasantly surprised’ at how strong racing is in face of Covid-19 15:21
Here is your handy guide to sport on television this week