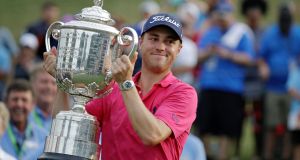 The future was foretold a number of years ago, when a keen-eyed photographer snapped two budding young players, in short trousers and kitted out in golf attire, sitting side-by-side and eating hamburgers. One of them was Jordan Spieth; the other was Justin Thomas.

On Sunday evening, Thomas boarded a NetJets private charter back to his home in Kentucky, with a special seat reserved for his newest, prized asset: the Wanamaker Trophy.

With his as the most recent name engraved onto the old trophy, the biggest in size of all the Major championship silverware, the 24-year-old had positive proof of his arrival as a new power in professional golf.

And, indeed, Thomas – who’d contended going into the final round of the US Open at Erin Hills in June only to crumble (finishing tied-ninth) and subsequently endured a series of missed cuts at the Travelers, the Quicken Loans National and the British Open before rediscovering equilibrium at the no-cut WGC-Bridgestone Invitational last week – demonstrated patience and maturity beyond his years to make the major step-up to claim the US PGA Championship at Quail Hollow.

In what was just his ninth appearance in a Major championship, Thomas – the son and grandson of professional golfers, admitting: “As a kid growing up, being a golf fan, you want to win all the Majors. You want to win any Major. For me, the PGA definitely had a special place in my heart, and maybe a special drive” – showed that the gene pool had produced the family’s greatest champion; and with the prospect of yet more to come, as he looks set to become a rival as well as a friend to Spieth in contending for future titles.

On what he himself described as a “crazy day,” Thomas – from the bluegrass state of Kentucky – produced more than his fair share of craziness.

A monster putt for birdie on the ninth was followed by a lingering birdie putt on the 10th that hung over the lip for what seemed like an eternity (in reality only seconds) before falling in . . . and, then, on the 13th, he chipped in for another birdie to separate himself from what had been a five-way tie for the d and ultimately march on through the Green Mile to a two-stroke victory over Louis Oosthuizen, Patrick Reed and Francesco Molinari.

The birdie on the 10th was an indication of the golfing Gods bestowing favours. His tee shot, for starters, hit a tree and bounced back onto the fairway.

“Get lucky, just spit it out for me, please,” Thomas had talked to the ball in flight. And, when it did, he turned to his veteran caddie Jimmy Johnson and remarked, “That’s why you ask!”

But that wasn’t the end of it. Just minutes later, his birdie putt hung on the lip of the cup before falling in.

“I didn’t even see it go in. I was more so looking at Jimmy, asking, ‘How does it not go in?’” And it was only the roars from the galleries that alerted him to the ball finally deciding to drop in what became an iconic moment of his victory.

Then, of that chip-in on 13 which would prove crucial, Thomas observed: “It’s tough to chip out of the rough, you can really look stupid in a heartbeat because it’s all into the grain and it’s really short to where you can just flub it. You can hit it right in front of you and if you try it play for that, it can come out hot and you can run it by. To have that chip come out perfectly, and exactly like I saw, and that was a roar like I’ve never experienced.”

To Thomas’s credit, he kept cool and calm – even when failing to birdie the drivable par four 14th or the par five 15th – and produced the killer blow with a birdie on the par three 17th.

It is worth noting, too, that Oosthuizen’s runner-up finish completed a Grand Slam of sorts: it meant he has now finished second in all four of the Major championships, as well – of course – as winning the Open at St Andrews in 2010.

For Thomas, though, it was a win which confirmed a talent that first manifested as a young child – aged six – when he called on his father to watch him hit fades and draws with a natural ease.

Now a Major champion, the aim for Thomas is to become a multiple winner and also to use the momentum heading into the FedEx Cup playoffs.

As he put it, “I know that a Major champion will never be taken away from, you know, after my name. Hopefully I’m going to win some more, plenty more, a lot more, whatever. I know you can’t get to two unless you get one. We’re getting to crunch time [of the season] and the FedExCup and the playoffs, and this puts me in a lot better position than I was before the week started. I’m just excited for that.”