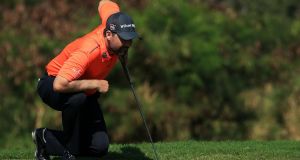 Padraig Harrington of Ireland is nine shots off the lead at the Sony Open. Photograph: Tom Pennington/Getty Images

Brandt Snedeker missed birdie putts from 12 feet on the last two holes and had to settle for a share of the lead with fellow American Zac Blair after the third round of the Sony Open in Honolulu, Hawaii on Saturday.

Ireland’s Padraig Harrington carded a third round 69, with birdies on the second, third, 10th and 17th holes before three bogeys on the back nine, leaving him tied for 39th place.

Widely known as one of the best putters in the game, Snedeker finished up with a flawless four-under-par 66 on a calm afternoon at Waialae Country Club to post a 16-under total of 194 in pursuit of his eighth PGA Tour victory.

A stroke in front of the chasing pack overnight, Snedeker was delighted to keep bogeys off his card but was frustrated that he failed to birdie either of the two par-fives -- the ninth and 18th -- when in good position off the tee.

“Disappointing that I parred them both from the middle of the fairway and I had a couple of really good looks for birdie that I didn’t make,” the 35-year-old told Golf Channel.

“Hopefully those putts will go in tomorrow and it should be a lot of fun.”

The unheralded Blair, still seeking his first win on the US circuit, fired a bogey-free 64 to end the day level with Snedeker, though he squandered a golden opportunity to birdie the last when he missed a putt from just three feet.

Compatriot Kevin Kisner, who for most of the day duelled with Snedeker and Blair for the lead, was alone in third place at 15-under after carding a 66.

Asked if he would adjust his strategy for Sunday’s final round, Blair replied: “If I just go out and kind of go with the same game plan, try and hit a lot of fairways, hit the greens and roll in a few putts, I should do good.”

Snedeker, who tied for third at last week’s Hyundai Tournament of Champions, made a solid start to the day with birdies at the third and fifth to remain one ahead before he was caught by Kisner and Blair as he reached the turn.

Though Snedeker edged a stroke in front with a tap-in for birdie at the 10th, Blair and Kisner each drained putts from more than 35 feet at the 13th to make it a three-way tie for the lead at 15 under.

Blair, a PGA Tour rookie last year, briefly seized the outright lead by sinking an 18-footer at the 15th before Snedeker, playing one group behind, followed suit from half that range on the same hole.

However, neither player was able to pick up any further shots over the closing holes as the ocean breezes strengthened and Snedeker and Blair will go into the final round deadlocked atop a tightly bunched leaderboard.

1 ‘Magnificent’ Conor Connelly remembered after sudden death
2 Billy Joe Saunders apologises for video of 'advice' on how to hit women
3 Karen Robinson Walton: I am looking at him. I say ‘Benjamin, what have we done?’
4 A beautiful, happy accident - Moneyball is the best sports movie ever
5 TV View: Mícheál Ó Muircheartaigh helping us all keep the faith
Real news has value SUBSCRIBE