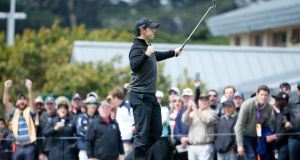 Rory McIlroy may have missed out on ringside seats for the big fight in Las Vegas, but the world number one delivered a knockout blow of his own to reach the final of the WGC-Cadillac Match Play in San Francisco.

McIlroy was one down with two holes to play in his semi-final with Jim Furyk before holing from three feet for birdie on the 17th and 40 feet across the 18th green for a spectacular eagle.

That took the top seed into the final with American Gary Woodland, who had recovered from an early two-hole deficit to beat England’s Danny Willett 3&2 in the first semi-final.

“I wish I didn’t have to finish like that all the time,” McIlroy joked, a reference to coming from two down after 16 to beat Billy Horschel in his final group game and one down after 17 to see off Paul Casey in the quarter-finals.

Casey had three-putted the 17th on Saturday evening and both players missed chances to win in three extra holes before agreeing it was too dark to continue.

Play resumed at 6:45am local time on Sunday and McIlroy two-putted from around 90 feet on the par-five first for a winning birdie after Casey was unable to get up and down from heavy rough after his three-wood approach ran through the green.

Casey revealed he had been ill overnight but refused to use it as an excuse, telling Sky Sports 4: “The place it affected me most was actually looking down on the chip, I felt nauseous looking down. But I have nothing to complain about, I had an opportunity yesterday and did not shut the door.

“It’s unfortunate but in seasons as long as ours there are moments through the year when you get sick. I’m a big fan of ‘beware the injured or sick golfer’ and I probably hit the best two shots on the first I have all week.

“My expectations were low but they did not stop me from trying. I am not going to put the par down to anything other than I should have hit the green in two or finished it yesterday.”

The late finish on Saturday meant McIlroy had to watch the fight between Floyd Mayweather and Manny Pacquiao on television in the media centre at Harding Park rather than in Las Vegas.

“Honestly I am sort of glad I did not make it because it was sort of an anti-climax and Mayweather did what he usually does and danced around the ring and outpointed him,” McIlroy said. “I am glad to be here and hopefully I can finish the week off well.”

Birdies on the first and fifth helped McIlroy into an early lead against Furyk and he looked set to increase that after chipping in from short of the green on the seventh.

However, Furyk followed McIlroy in from 20 feet there and also birdied the eighth, while a par was good enough to move one up at the ninth as McIlroy failed to get up and down from a greenside bunker.

McIlroy got back on level terms with a birdie on the 11th and was gifted the lead when Furyk made a mess of the next, the former US Open champion pushing his drive into the rough after McIlroy had done the same and then hitting a tree with his second shot.

However, Furyk bounced back with a superb tee shot on the 13th to set up a birdie from five feet and moved into the lead with another birdie on the 15th.

Both players birdied the short 16th before McIlroy made the decisive move with a brilliant tee shot on the 17th, and with Furyk facing a birdie putt from 25 feet on the last, the 25-year-old made certain of victory by holing his long putt for eagle.

Willett had been two up after four against Woodland but saw his opponent birdie the sixth, seventh, 12th and 16th to move into the final.

“We were three under par and played some solid golf, just missed a couple at the wrong time and he made a couple of nice ones at the end,” said Willett, who bogeyed the eighth and also three-putted the 14th having birdied the 13th to get back to one down.

“It’s been a really long, tough week and we have to take away the positives, that it’s Sunday in a World Golf Championship and we are here competing.”