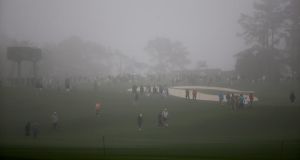 Patrons walk on a fog-shrouded course during the first practice round at the 2014 Masters Tournament at Augusta National Golf Club. Photograph: Erik S Lesser/EPA

Just two hours of practice for the US Masters was possible on Monday before players, and thousands of disappointed spectators, were forced to leave Augusta National due to an approaching thunderstorm.

The bad weather arrived earlier than previously forecast and led to an announcement at 10am (3pm Irish Time)asking spectators to leave the grounds and seek shelter. Tournament officials then announced at lunchtime that the gates would remain closed for the rest of the day, the first time that had happened since the same day in 2003. Spectators will receive refunds in May and be guaranteed the opportunity to purchase tickets for practice rounds in 2015.

Augusta National chairman Billy Payne said: “We are disappointed that our patrons could not enjoy today’s practice round, however safety must be our first concern. We look forward to seeing these patrons next year.”

Confirmation that gates will stay closed for rest of Monday. Spectators to be refunded and offered first option on tickets for 2015 practice

Around 30 players had been out on the course, including Northern Ireland duo Darren Clarke and Graeme McDowell, German pair Bernhard Langer and Martin Kaymer and world number four Jason Day, who was playing alongside British amateur champion Garrick Porteous.

Pre-tournament favourite Rory McIlroy had spent around 90 minutes on the practice range before leaving the course.

One player unconcerned about the weather was England’s Lee Westwood, whose recent approach of not arriving at Augusta until Tuesday paid off handsomely. In response to a question about the weather on Twitter, Westwood wrote: “No idea about Augusta but it’s lovely in Florida.”

A weather forecast issued at 8.30am local time said that the expected rain had started to “surge eastward towards Augusta National... as a result the starting times of the rain and thunderstorms have been shifted earlier a few hours.

“Rain and embedded thunderstorms will occur from late this morning through the early afternoon hours, before a break develops by the late afternoon. This should limit most of the stronger thunderstorm activity, but heavy rain, blustery conditions and occasional lightning can be expected as this moves through.”

1 Gerry Thornley: Saracens very late to apologise for repeated cheating
2 Felix Jones expects De Allende and Snyman to boost Munster
3 O’Leary team say too much watering better than too little at Leopardstown
4 Jennings looks on in wonderment at Tottenham’s brave new world
5 Champions Cup final: How to get there, how to get tickets and more
Real news has value SUBSCRIBE