Shane Lowry using Valderrama as light at end of the tunnel 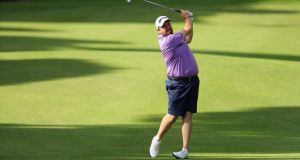 Shane Lowry of Ireland plays in the pro am ahead of the Turkish Airlines Open at the Regnum Carya Golf & Spa Resort in Antalya, Turkey. Photo: Warren Little/Getty Images

The shorts expose legs that once upon a time seemed destined for the football pitch. Shane Lowry is standing on the practice range here at Regnum Carya resort – a top-end hotel with adjacent golf course – having a bit of the craic with himself, drilling shots at the towering trees which are only crying out to be hit.

It’s a sign of Lowry’s accuracy with irons in hand that his Srixons pound the trees more often than not. And the sense that the clubs are obedient to his whim is reinforced when he takes aim at the flags dotted about the range. Once again, he peppers the flagsticks. Now, it is a case of bringing that game out onto the course with scorecard in hand at this Turkish Airlines Open as he bids to finish off his year’s work in style.

And, for sure, Lowry’s game is in a good place as he heads into a four-week stint on the road in tournaments that he is guaranteed to be around ‘til the death. There are no cuts in any of the three Final Series events – in Turkey, Sun City and Dubai – which make up the run-in to the European Tour season, and no cut either in the World Cup in Australia where he will round off his year in partnership with Paul Dunne.

Lowry – currently 42nd on the order of merit – has targets to meet heading into this stretch of big money tournaments. He wants to at least move inside the top-30 on the Race to Dubai final standings (which would earn an exemption into next year’s British Open at Royal Portrush), while getting into the top-20 would bring that ticket to the Causeway Coast along with an exemption into the WGC in Mexico.

“That’s the big thing,” said Lowry of that bid to move up the money list and ensure his place in the British Open next July. “I don’t want to have any doubt in my head whether I will be in Portrush next year. I would love to make sure that I will make it, to tick that box early. That’s a big thing for me, to finish the year and you know you are in the Open.”

Certainly, Lowry – who has played a rather limited European Tour schedule this season, only 10 tournaments so far – has shown decent form of late, most notably a runner-up finish to Sergio Garcia in the Valderrama Masters.

“I’m showing a bit of form and I think I could do alright this week. My iron play is nice, it is good at the minute. I put a new set of irons in the bag only the week of Portugal. Srixon have a new iron out, and I just put them straight in the bag. I didn’t even test them. I liked the look of them.”

Things have come together for him. The irons weren’t the only new part of Team Lowry in Portugal. That was also the week he started to work with caddie Brian Martin but it was the performance in Valderrama that brought true confirmation of an upturn.

“It showed me there is a little bit of light at the end of the tunnel. Sometimes, as you are going through the year, you feel like you are not going to shoot good scores. You can get down on yourself and the game can get down on you . . . . I keep coming out saying my golf is good, this that and the other, and people are looking at me saying, ‘you must be mad thinking your golf is good’. But you go to Valderrama and on a course like that shoot eight-under for three rounds and it shows you are playing good golf.

“I feel like I am hitting the ball solid. There’s not a destructive shot in there and, when it comes down to it, if I hole a few putts, I normally do alright,” said Lowry.

Dunne is another looking to finish the season strongly. In what has been a mixed season, which saw him finish runner-up to Jon Rahm in the Spanish Open before hitting some speed bumps over the summer – including a stretch of four missed cuts in six events – Dunne explained: “I played my best golf ever I think, April-May time, played really well. It was as consistently as I played for a stretch, played really solid for six weeks in a row which I had never done before which was nice. Also I had a six week competitive stretch as bad as I have had.”

However, the Greystones golfer – like Lowry into a four-week run – has arrived in Turkey on the back of a week-long coaching session in the United States during which he ironed out an issue with his iron play. “A few good weeks and it turns out to be a great year. A win is obviously what I want. It doesn’t have to be now, but in the next while,” he said.