Shane Lowry: Two weeks to turn an average season into great one 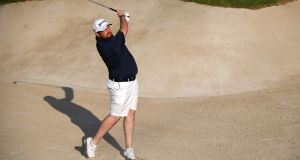 Shane Lowry plays out of a bunker during a pro-am round ahead of the DP World Tour Championship at Jumeirah Golf Estates in Dubai. Photograph: Ross Kinnaird/Getty Images

The nights might be closing in at home, with a bit of a chill coming into the air, but not so much out on tour. That’s the thing with professional tournaments, which generally follow the sun, something we seem to take for granted. This week we’re in Dubai – not quite hot enough to fry an egg on a stone but close – and next week I’m teaming up with Graeme McDowell to represent Ireland in the World Cup in Melbourne. It gives me two weeks to turn what I consider an average season so far into a great one.

Will I? Can I? Certainly, I hope so. Golf’s a funny game; you don’t know what’s going to happen. There’s a bit of an end-of-school feel about this DP World Tour Championship, the players seem a bit giddy that the season is coming to an end (check out the #MannequinChallenge on social media, good craic!), but I intend to go out and give it my best this week. It’s a course I like and I’ve shot low on in the past.

I’ve been in Dubai for over a week. Wendy is here and so are my parents, and it’s been nice to combine a bit of a holiday last week with getting ready for a crack at the season-ending event on the European Tour. I’ve played at lot of golf since getting to Dubai, at The Els club and on The Earth – where the tournament is taking place – and even managed to squeeze in a company day for one of my sponsors, McGettigans. I played the pro-am on Tuesday, and another practice round yesterday. So, a lot of golf! Now, it’s about getting down to business with a card in my hand.

I’ve been working with a sports psychologist, Gerry Hussey, when I’m at home, and he is someone I can just talk to and feed off. This whole area of sports psychology is something different for me. I’ve never really done it before or bought into it, but I’m really enjoying how this is developing. I think he suits me. We’re not sitting there doing breathing techniques or visualising shots yet; it’s all fairly basic stuff at this stage but it is something I intend giving a go for the next while and see what happens.

Patience is the key, this week and every week. I was reading a great quote from Alex Noren after his win in the Nedbank Challenge, where he said every shot you hit doesn’t have to be perfect to win a tournament. Maybe I’ve been trying to be a little too perfect with things, or trying to play brilliant golf all the times when, really, it is all about getting the ball around the course.

I know myself I haven’t been shooting the scores I should be this season. I’ve been finishing tournaments in probably the worst position I could finish in. It’s about getting back to basics. When I’m not playing well, just to try and shoot a decent score. And when I am playing well, it’s about taking advantage of it. I’ve two tournaments left of my season: this week in Dubai, my last individual event of the season, and next week in Australia with G-Mac. Hopefully it’ll be about taking advantage of good play in both cases.

I’m really looking forward to playing with Graeme in Melbourne. I was actually chatting with him on the phone the other night and, apart from a poor first round, he played really good for three rounds in his defence of the Mayakoba last week. I think we can do well in the World Cup, and I’m looking forward to again playing foursomes as part of the format. I loved it back in my amateur days and hadn’t played it for nine years up until the EurAsia Cup earlier this year.

I was looking at my itinerary and I have a 3am flight out of Dubai on Sunday night/Monday morning, whichever way you want to look at it, and only get into Melbourne on Monday night. I plan to be at the course with Graeme on Tuesday morning and hopefully to set about emulating what the rugby boys and the soccer lads have been doing for Irish sport in recent weeks.

Before then, I’d like to show a bit of form in Dubai. God knows what’s going to happen, but if I can somehow give myself a chance to win and manage to pull it off, this can end up being a great season.