Shane Lowry: Next few weeks on tour are season-defining for many of us 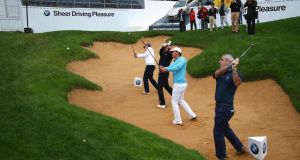 Justin Rose, Ian Poulter, Wu Ashun of China and Paul McGinley play from a bunker on the 18th hole prior to the BMW Masters at Lake Malaren Golf Club in Shanghai, China. Photo: Matthew Lewis/Getty

If I’m entirely truthful, as a boy growing up in Clara, when that first putter was put in my hands, the thought of holing a putt to win a big tournament never took me to China. It was always the Claret Jug or the Masters, and yet the growth of Chinese golf – definitely as a staging post on the European Tour – is shown by the huge prize funds which this week’s BMW Masters and next week’s WGC-HSBC Champions tournament bring to the pot.

These next few weeks on tour are season-defining for many of us and possibly career-defining too, simply because of their positioning at the tail-end of the playing season and I know I am one of those players able to make an impact. I’m 13th in the Race to Dubai standings and, with the top three players all missing the BMW in Shanghai and also the decision to enhance points for the four “Final Series” tournaments, there is added incentive to make the most of the situation.

I know there are different reasons for Rory McIlroy, Sergio Garcia and Henrik Stenson not being here. It is hard on the sponsors and it affects the amount of world rankings points on offer but the way I look on it is that it means there are fewer players to be concerned about. You look at this course at Lake Malaren, wide fairways and playing long, and it is tailormade for Rory and Henrik especially which would have meant fighting to be one of eight others to get a top-10. Now, it is all to play for. It’s a case of getting on with it and doing your job.

I actually enjoyed my pro-am yesterday, playing with three Chinese amateurs. Fortunately, there was no language issue. I don’t speak mandarin but two of the team actually spent 10 years studying and working in Birmingham and had great English, so we were able to have proper conversations all through the round. It was quite enjoyable.

Although we’re in China, we – as players – are quite protected. We’re in a nice hotel, very westernised. I ate Italian on Tuesday night, steak last night. On a couple of nights you might get away into Shanghai but, for the most part, you’re staying and working on site.

I like Lake Malaren as a course. I’ve done well in the past. On my first visit two years ago, I was fifth. The forecast for the week isn’t great, so it could mean it plays longer and that the scoring might not be as good. But it is what it is.

This is my first tournament out since the World Matchplay which didn’t go to plan; I failed to get out of the group stages. I was disappointed but you have to get on with life and move on to other things. I spent a few days with friends in London after the Volvo and managed to get home on the Sunday in time to see Leinster’s win and my friend Fanj (Darragh Fanning) scoring a couple of tries. Those sort of things do cheer you up. After that, it was a quiet week up to my nephew’s christening on Saturday.

I’ve played well in the big tournaments in the weeks that matter this season. In the BMW PGA at Wentworth, the Scottish Open, the Wales Open and also that top-10 in the British Open. If you do well in bigger tournaments, you get the benefits and that’s how I look on it coming into the next few weeks. These are big tournaments. I want to at least get into the top 10 on the final money list and I am aiming for four decent weeks to achieve that aim.

Chelsea get over early setback to go back top of Premier League 22:24
Robbie McDaid announces himself as the next Dublin man to come around 21:16
Dublin pick Cavan off with precision and turn it in to a procession by the end 20:46
Manchester United roar back as Rashford seals win over West Ham 19:41
Wales finally pull clear of Italy’s grip in another lacklustre display 19:22
Here is your handy guide to sport on television this week