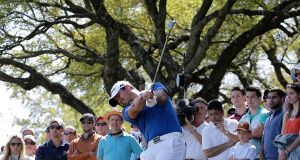 Jason Day in action last week: “His driving. His iron play. His short game. If you add them all together, and when he is on form, then he is very hard to beat.” Photograph: Eric Gay/AP

Out on tour, we play for ourselves. It’s selfish but that’s the way it is.Focus on yourself, and you don’t tend to look at what others are doing.

Having said that, it’s hard to escape what has been happening in recent weeks on tour with big players really stepping up their games: we’ve had Bubba Watson playing well, then Adam Scott, and now Jason Day winning two in a row. The top end of the game at the minute is very, very strong.

Jason, for me, is particularly impressive. His all-round game is probably the best in the world. His driving. His iron play. His short game. If you add them all together, and when he is on form, then he is very hard to beat as he proved in Bay Hill and again in the WGC-Dell Matchplay.

When you’re on a run of decent finishes and wins, you feel like you’re never going to play badly again. That’s the way golf is, confidence breeding confidence, but it is important not to take that for granted because it will shoot you down fairly quick. And at this time of the year, just a week before Augusta National, everything you do comes with a twist on how it affects the Masters.

It will be interesting to see how Jason gets on at the Masters. He is probably going to be going in as the world number one and as the favourite too.It will be up to him to deal with that. You just need to let the hype happen around you and try to get on with what you’ve been doing. The evidence is clear that whatever he has been doing lately has been right for him.

I was doing my best to beat Zach, because I always want to win and to give it my all, but I was down early on and it was hard to get back at him. The match against Martin was the big one; I felt I should have got something out of it. Walking off the 18th with nothing was hugely disappointing.

It’s no secret but I am not a huge fan of the matchplay format and playing group matches. I just prefer straight knockout. I think that’s a better way to play matchplay: when someone gets beaten in the first round and wins the tournament it doesn’t make sense to me.

I hung around Austin on Saturday but didn’t do too much and then drove on to Houston. The road trip is less than three hours, but it gave me plenty of time to think about things. Does a disappointing world matchplay impact on the Ryder Cup? I don’t think so. It’s good for you if you do play well but it is probably a little bit too far away from the Ryder Cup to have any relevance.

This week’s Shell Houston Open is certainly good preparation for the Masters. I hit some balls on arriving here on Sunday, practised on Monday and played the golf course on Tuesday. The course is right there in front of you, there’s not much rough and there’s a bit of water that comes into play, but if you stay clear of that you’ll be fine.

The course in Houston is very much set up like Augusta National, the greens are fast and firm and the fairways are mowed into you just like at Augusta. To me, it is a bit like playing the Scottish Open the week before the British Open.

I’m not treating it like a warm-up for next week, though. I’ll be treating it as another event and I’ll be trying to do well. I won’t be thinking about what shots I need to be hitting next week. It’s about going out and trying to shoot as low as I can.