Shane Lowry: it feels good to be getting back in the swing

I wasn’t even a pro when the British Masters was last played, but Woburn is a great course 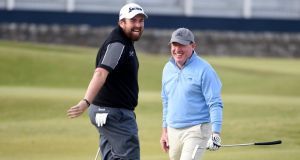 Shane Lowry was yet to turn pro the last time the British Masters was played. Photograph: Getty

I was hanging out with a few of the other lads in the clubhouse at Woburn on Tuesday, a cup of coffee in hand, chatting and looking at the board on the wall which had the names of past champions of the British Masters. It’s at times like that you really become aware of the great history of these tournaments.

Our own Christy Junior.

Lots of great champions and great personalities. I was thinking, ‘It’d be nice to get my name among them!’

I wasn’t even a professional when the British Masters was last played – back in 2008 – so it is brilliant that a tournament like this is back on the European Tour schedule, and personally I am delighted with the Marquess course here at Woburn, a very similar feel to Wentworth but probably even in slightly better condition.

If you look back on my results over the past couple of years, a lot of my good finishes have come in the UK. I’m comfortable coming over here and tend to play well.

It’s been three or four years since I actually got the chance to play any golf with Niall, so it was nice to catch up and play a few holes together and I’m happy with the way I’m playing. It was really good to be back on the road again at the Alfred Dunhill Links last week, and a top-20 finish there was decent.

To be honest, I wasn’t too excited when I saw the draw and that I was playing Carnoustie first. Everyone knows it’s the toughest of the three courses and, after six weeks away from any tournament golf, I’d have preferred to play St Andrews or Kingsbarns first.

I played okay, just hit it in a lot of bad spots off the tee, a sure sign of some rustiness, but I played better the second day in Kingsbarns and then played great on the Old Course at the weekend. I was a little bit too far behind going into the weekend to challenge, but overall I was pretty happy with a tied-19th, especially after the first day.

I’d enjoyed my few weeks off but it was good to be back out on tour again, back playing golf with a card in my hand, and now I want to focus on the rest of the season and especially on the Race to Dubai. I’m sixth at the moment, but with a strong finishing itinerary up to Dubai.

On Sunday evening, I was talking with Dermot (Byrne), my caddie, and he was saying the way I played over the weekend, in the final two rounds, that it was like I’d never been away. I think that’s a sign of how much more confidence I have in myself, getting back into the swing of things so comfortably after taking such a break.

I got home to Dublin on Sunday night rather than heading straight down to London. I like being able to get home for a short time, even if it’s only to get a bit of washing done and to see a few friends. I’d a nice, relaxing day on Monday and then got to Woburn and I’ve felt comfortable straight away. I’m hoping to contend this week. I always set out to win.

My mindset will be the same as it always is: first things first, get through the first couple of rounds and then try to put myself into a decent position going into Sunday. That’s my goal most weeks. If I have one bad round, I don’t panic.

But, rather than just focus on this week, I’m really trying to focus on the process of doing well in the Race to Dubai. That’s my target for the rest of the season, with the Final Series – the Turkish Airlines Open, the WGC-HSBC, the BMW Masters and the DP World Tour Championship – to look forward to.

Onwards and upwards, as I say.

1 Andy Farrell hands Billy Burns first Ireland start against Georgia
2 ‘God is dead’: The world’s front pages remember Diego Maradona
3 Keith Duggan: Through the glories and the disgraces, we were all Maradona addicts
4 GAA Statistics: Can Cavan and Thomas Galligan beat Dublin with the long kickout?
5 Fans back in Liverpool and London next week but 10 Premier League clubs must wait
Real news has value SUBSCRIBE