Shane Lowry: I hope this year is even better than 2015

The Ryder Cup, the Olympics, the Majors – there’s so much to play for in 2016 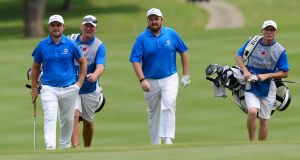 Andy Sullivan and Shane Lowry of Team Europe: “The whole experience of playing in the EurAsia Cup has whetted my appetite for the year ahead and on trying to make the team for the Ryder Cup.” Photo: Arep Kulal/Getty Images

I locked the clubs away for the winter, four weeks in the club glove bag with no desire at all to unzip them. But, once I did, it was with a renewed appetite. From hitting some balls for a couple of days in Carton House, to spending a few days in warm-weather practice in Dubai and, finally, teaming-up with the rest of the European team for the EurAsia Cup last week, it was the perfect way to kick-start what hopefully will be a huge year for me.

There’s (hopefully!) a Ryder Cup and an Olympics on top of the four Majors and the WGCs and all the other big tournaments . . . . so there’s a lot of golf balls to be hit before the year is out. And I’m already into the swing of it.

It’s strange really to think that you spend months of the year on tour but you don’t really get to know players until you are thrown into a team environment such as last week in Malaysia. We had some nice diversions in the team room: PlayStations, pool table and table tennis. The main focus, though, was on playing golf and on that score we were very serious as the final result showed. It might sound cocky but we knew we were the better team on paper and we went out to prove it where it mattered on the golf course and we did.

I played fourball and foursomes with Andy Sullivan for two days in Malaysia and fair play to Darren Clarke for putting us together. I’d never spent much time with Sully on tour. I knew him; we’d chat in the players’ lounge at tournaments, or have the odd lunch together, but otherwise we went our separate ways.

Darren has these stat guys who came up with the pairings and myself and Andy definitely gelled. We’re well matched, we try to be happy-go-lucky and to get on with things, and pairing us proved to be one of those things that worked straight away.

Returning to competition in such a team environment was a good move, I felt. I had a great winter. I put the clubs away for effectively four-and-a-half weeks after playing in Sun City and didn’t touch them again until going down to Carton House on the Monday after New Year’s to hit some balls. I got the hunger back over Christmas and I’m now itching to play again, and especially looking forward to playing in the Farmers Insurance Open in Torrey Pines next week.

In effect, that tournament in San Diego will start my season which will be very much focused on the PGA Tour up until I play in the Irish Open at The K Club in May. From now until then, it will be all about playing in the States and I think I have a great schedule mapped out: I’m playing Torrey Pines, Phoenix and Pebble Beach for starters, then have a week off before playing the Honda Classic and the WGC in Doral. Then, I have a two-week break before playing the WGC Matchplay, the Houston Open and the US Masters.

The big difference to this time last year, when I also started out playing tournaments in America, is that I now have a full PGA Tour card. No need for sponsor’s invites, or being selective about what invite to take up. It is fantastic to play where I want, all big tournaments with good world ranking points. I’m looking forward to trying to better last year, to better myself and to compete at the highest levels in tournaments.

I feel like I am a much better player than just trying to keep my card or whatever. The only pressure on me is from myself; I see myself as one of the top players and I should be competing and contending most weeks I play.

I’m not one for writing down my goals on paper. I sat down with my manager Conor Ridge, coach Neil Manchip and caddie Dermot Byrne recently and obviously the Ryder Cup and playing in the Olympics form part of the big picture going forward. I know what I want to do, to win again. But there are other smaller goals, in golf and away from the sport, that I’ve set and focusing on those then helps me focus on that bigger picture.