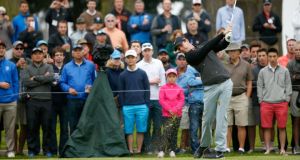 Rory McIlroy tees off on the 17th hole during round three of the World Golf Championships Cadillac Match Play at TPC Harding Park on May 1st, 2015 in San Francisco, California. Photograph: Getty

World number one Rory McIlroy fought back from two holes down with two to play to beat Billy Horschel at the WGC-Match Play Championship on Friday, while Masters champion Jordan Spieth was knocked out after losing to Lee Westwood.

McIlroy buried a 24-footer for birdie to win the 17th then birdied the last to square the match with FedEx Cup champion Horschel, who faltered with a bogey at the second extra hole to send his opponent into the last 16.

McIlroy, who will play Japan’s Hideki Matsuyama in the next round, said he picked the perfect time to hit his best putt of the day on 17.

“Obviously you make the putt or you are going home,” he said. “Hit the best putt that I hit all day, thankfully.

“When I got him up to 18, I knew just try and keep the pressure on him and somehow I was able to turn it around.”

England’s Westwood beat Spieth 2 up, fighting back from an early deficit and ramming home an important 12-foot birdie putt on the 17th to wrestle a lead he would not relinquish.

After missing an 11-foot birdie putt on the first and then making bogey on the second hole, Westwood was two down out of the blocks.

A Spieth bogey on six and a 13-foot birdie putt for Westwood on the ninth squared the match at the turn.

Westwood took the lead a hole later when the 21-year-old American failed to get up and down from just off the green.

After the 11th hole they were square again when Spieth made a birdie from 14 feet.

The pair then traded clutch pars for three holes.

Spieth appeared in trouble when he missed the 15th green but chipped in for birdie. Westwood did not flinch and made his six-foot birdie putt to match.

A hole later it was Westwood with the heroics.

After sending a greenside bunker shot over the green and leaving his next chip short in the rough, the Englishman chipped in for par and Spieth missed his 14-foot birdie chance to stay tied.

Westwood birdie the penultimate hole, leaving Spieth needing to win the 18th, which he was unable to do.

Westwood will play compatriot Danny Willett next up.

Hunter Mahan, the 2012 champion and 2013 runner-up, advanced to the final 16 for the fifth straight year with a crushing 5&4 win over fellow American Matt Kuchar.

Mahan has destroyed his group, winning 7&6 over Stephen Gallacher and 5&3 over Ben Martin over the opening two days.

He will face Australian John Senden, who finished off his group play 3-0 with a 1 up win over Brendon Todd, knocking out world number three Henrik Stenson and former FedEx Cup champion Bill Haas in the process.