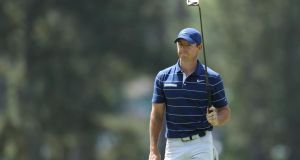 Rory McIlroy carded a first round of 73 at Augusta. Photograph: David Cannion/GettyA

Some equilibrium came to him on the 13th fairway. Up to that point of his opening round to this 83rd edition of the Masters , Rory McIlroy - the man with history hanging like a monkey on his back - had been up on a rollercoaster ride. Up one moment. Down the next. All he wanted to do was to apply the handbrake, take back some control, before motoring forward on his own terms.

For the first 12 holes, McIlroy’s round featured four bogeys and two birdies and, at two-over-par, standing on the tee complex, there was a need to bring stability to the ride. Which is what he did, a booming drive over the cathedral pines put the Northern Irishman’s ball in the middle of the fairway. And, from there, his iron approach found the heart of the green.

That it didn’t trundle down the slope towards the flag was the only part of the shot-making that was out of his control. As he removed his white glove from his left hand and continued walking up the fairway, McIlroy gestured with his hands to his caddie Harry Diamond. You didn’t need sign language to understand he was wondering how the ball hadn’t managed to roll on and down. He didn’t get the eagle, but he did roll in the birdie putt. Equilibrium restored.

By the time McIlroy reached the next Par 5, the 15th, the walk had developed into a more recognisable, jaunty swagger. The chest was pumped out, the shoulders up. There was a lightness in his step.

And, again, McIlroy’s power game was evident: although the drive was pulled slightly to find the first cut down the left, he produced a superb approach over the trees to reach the green in two. The 30-footer for eagle edged the hole, missing, but he tapped in the short birdie putt to get back to level par on his round. He was back in the game.

McIlroy kept his foot on the pedal. On the Par 3 16th, his tee shot finished 35 feet from the flag and, opting to keep the flag in, his putter did its magic as the ball found the old tin cup. For the first time in his round, he’d managed to get under par. One-under. Coasting. Or maybe not.

On the 17th, McIlroy hit a hump in the road. The steady run was suddenly askew. The equilibrium went. And he was on a downward spiral.

A wayward tee shot left him a difficult approach through the trees and he did well to find the back of the green. But it left him with a difficult undulating putt, which he left eight feet short. He missed the par putt. Bogey. Back to level.

And his closing drive again misbehaved, leaking left. McIlroy, though, found a window through the trees but his attempt to find the green failed. The ball finished in the hollow to the left. He failed to get up and down to save par. A bogey-bogey finish left McIlroy signing for a one-over-par 73. In all of his professional wins through the career, McIlroy has never won with an opening round of 73 or higher. Food for thought; or a chance to change the statistic?

“I just made too many mistakes, and that was the problem. And I’m making mistakes from pretty simple positions, just off the side of the green, 17 and 18 being prime examples of that,” admitted McIlroy afterwards.

McIlroy - who headed off to the practice putting green - added: “I can accept mistakes if I’m trying and it’s not a mental error or I haven’t got into places, so I can accept some mistakes, but six bogeys out there is a little too many and I’m just going to need to tidy that up over the next few days.”