Redemption for Kevin Kisner as he takes WGC Matchplay 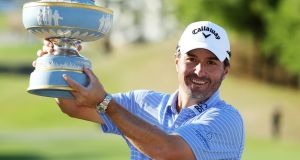 A year after being thrashed in the final, Kevin Kisner enjoyed a far happier experience at Austin Country Club by beating Matt Kuchar to win the WGC-Dell Technologies Match Play title.

Kisner, who ended the 10-match winning run of Open champion Francesco Molinari in the semi-finals, beat Kuchar 3&2 to win his third PGA Tour title and the biggest of his career.

The 35-year-old was never behind in an error-strewn final but saved the best until last with a birdie on the par-five 16th to seal victory after Kuchar had left his eagle attempt from 20 feet agonisingly short.

Kisner, who lost 7&6 to Bubba Watson 12 months ago, told Sky Sports: “I’m relieved. It’s a long week, I played great and did the things I needed to do to win and that’s what you have to do in match play.

“I’m glad to come back after my performance last year and do a little better. I said to Roger (Maltbie, TV commentator) in the fifth fairway that we’re doing a lot better — I was five down last year right here.

“I didn’t think Matt played his best, I don’t think either one of us did but it’s a long week and we were both grinding our butts off. I was just lucky enough to hole a few more putts.”

Molinari had earlier fought back from two down with three holes to play against Kisner with birdies on the 16th and 17th, only to lose the match by three-putting the 18th.

It was the first time the Open champion had played the 18th in competition this week after enjoying five comfortable wins to reach the last four.

Molinari was thrashed 7&5 by Justin Thomas in his final group game 12 months ago, but became the first European player to compile a perfect 5-0 record in the Ryder Cup and had beaten Satoshi Kodaira, Thorbjorn Olesen, Webb Simpson, Paul Casey and Kevin Na to reach the semi-finals.

In the other semi-final, Kuchar ended the brilliant run of Denmark’s Lucas Bjerregaard with a hard-fought win.

There was never more than one hole between the pair and Bjerregaard, who got the better of Tiger Woods in the quarter-finals, got back on level terms four times after Kuchar edged in front.

Bjerregaard also crucially matched Kuchar’s birdie on the 17th to keep the match alive but was unable to repeat the feat on the last and Kuchar safely two-putted for par.

Molinari made an uncharacteristic error when he chipped into the water on the par-five 12th and also bogeyed the 14th before his brace of birdies kept the match alive.

“I just didn’t quite play my best,” Molinari said. “We played quite well on the front nine and then just dropped too many easy shots on the back nine, unfortunately.

“I bogeyed 12, 14 and 18 from decent spots so it’s not something really you’re allowed to do. But it’s still a positive week.”

Bjerregaard also tried to take the positives away from his week in Austin, adding: “I can see from my Instagram and so forth that a few people have gotten to know my name from yesterday.

“So it’s been a great week, no matter what happens. But, yeah, it stings a bit now, I’ve come this far, and I’d love to have a chance in the final.

“Neither of us played really well on the front nine and I didn’t do much, made a lot of pars and he made a few birdies and a few bogeys.

“I had a few chances on the back nine, just didn’t putt well enough. Just didn’t put pressure on him when I needed to, which I succeeded with yesterday.”