Harrington’s final round 66 isn’t enough, as Paul Dunne misses out on Open place 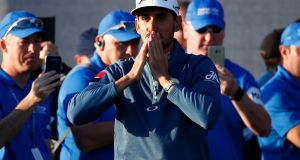 Only those with the hardest of hearts would not feel sympathy for Callum Shinkwin. What a cruel sport golf can be.

For Rafa Cabrera-Bello, a first European Tour victory since 2012 was sealed by a sensational fairway wood into the green of the first play-off hole. Two putts from there proved sufficient to claim the Scottish Open.

Shinkwin, who started the week as the world No405, will take little solace from earning his place in the Open Championship field. The 24-year-old needed only a par at the 72nd hole to win the Scottish Open, thereby doubling his career earnings in one event.

Instead, Shinkwin – who hadn’t dropped a stroke all day –overshot the green of the par five in two and proceeded to make a mess of what remained. His missed putt from five feet away rather indicated what would happen next. Upon returning to the 18th, Cabrera-Bello, who compiled a Sunday 64 to match Shinkwin’s 13-under total, was nerveless.

Cabrera-Bello is therefore worthy of more Open attention than would ordinarily have been the case. The Spanish are on a roll; just a week earlier, Cabrera-Bello’s compatriot Jon Rahm won the Irish Open.

Padraig Harrington will return to Birkdale, where he won the 2008 Open, in fine spirits after a Sunday 66. Harrington’s eight under total secured him a top five place.

Meanwhile Paul Dunne missed out on one of the three qualifying positions at next week’s British Open, after a final round 74 dropped him back 21 places, leaving him four under par overall and in 26th.

Ian Poulter encountered trouble on the greens early in his fourth round and failed to find momentum thereafter. Poulter’s 74 meant a share of ninth.

Matthieu Pavon and Andrew Dodt joined Shinkwin in earning Open spots by virtue of their performances in Scotland. Dodt holed out from five feet at the 18th to secure his Birkdale place, perhaps a disappointment to his wife, who was planning for a holiday in New York from Monday.

Henrik Stenson, who will defend the Claret Jug from Thursday, cut a downbeat figure despite signing off here with a 68. “I know I’m not really where I want to be with my game,” said the Swede. “The long game hasn’t been in good shape for a long time. I don’t feel I have enough game to play the way I want to, and as soon as you go into practice mode you are losing the possibility to play your best. It’s a tricky one.

“I’m still going to enjoy next week. Who knows? It might be my only Open as defending champion. I think that’s the most important thing coming into an event like this, not feeling that you’re playing anywhere near 100 per cent. Maybe we can turn things around a little bit but I need to step it up quite a lot.”

Rory McIlroy, meanwhile, admitted he is still troubled by the rib injury which has disrupted his year. The Northern Irishman missed the cut, meaning a weekend spent at the Open venue. “I am feeling OK, but it is something I am going to have to manage until the end of the year,” he said, speaking at Birkdale on Sunday.

“I am just going to manage the load for the rest of the season, then I am just going to have a nice rest period when I don’t have to touch a club and let it and heal. Then hopefully I’ll be 100 per cent for next year. It is just something I have to be mindful of for now.”