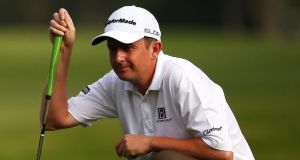 Dubliner Peter Lawrie secured his European Tour card for next season with a final round of 70 at the ISPS HANDA Perth International at Lake Karrinyup, but compatriot David Higgins is bound for Q School.

Lawrie began the weekend in 114th place in the Race to Dubai rankings, with only the top 110 guaranteed cards for next season, but his final round of 70 saw him finish on three under par, 18th overall, and clinch 109th spot in the rankings.

Michael Hoey moved up to 90th position when he too finished three under after a 74.

Higgins, however, must head to qualifying school next month, having dropped to four over with a 73 that kept him on 115th in the rankings.

“I’m just glad it’s over to be totally honest with you,” Lawrie said afterwards. “I’ve never felt so much pressure as the last eight weeks; can’t sleep, can’t eat properly, it’s just horrendous. I wouldn’t wish it on my worst enemy.

“I got off to a great start, so it wasn’t that much pressure, but jeepers, just coming down trying to get the job finished without making a mental error or doing something stupid, even finishing bogey, bogey.

“Finishing anywhere in the 20s I reckoned was going to get me to keep my card, but it’s not easy, I can tell you that. It is not easy.

“Hopefully fly home and probably sleep for a change. Go home and be with the family and stop being grumpy.”

Jin Jeong defeated Ross Fisher to win the tournament in a play-off.

Jeong (23) prevailed at the first extra hole to claim his first European Tour title after the pair had finished tied on 10 under par after the final round.

The South Korean would not have been expecting to end with the title after a nightmare start to his final round that saw him double-bogey the first. He recovered with birdies at the fourth and fifth, and as overnight leader Brody Ninyette saw his challenge falter with three bogeys over the final six holes, Jeong hit the front after further gains at the 11th, 12th and 15th.

Fisher hit six birdies against two bogeys on his way to a 68, but after taking Jeong to a play-off the Englishman quickly came unstuck on the return trip down the 18th when his approach shot went through the green, leaving his rival two putts to wrap up his maiden title.

Ninyette’s late collapse saw him card a level-par 70 to leave him in a tie for third place alongside fellow Australian Dimitrios Papadatos and England’s Danny Willett.

Jeong admitted he had to fight hard to control his emotions as he closed in on victory.

“I was nervous, I was shaking but I controlled myself pretty well all day I thought,” Jeong said on europeantour.com. “I don’t know what I’ve done to be honest.

“I had played play-offs in mini tour events, but playing with Ross Fisher, he’s one of my heroes. Playing with him in the play-off, it was unbelievable.”

Fisher added: “Obviously it would have been lovely to have come here and won, but that’s golf.

“Unfortunately I came up a little bit short, but I can be very pleased the way I played today. I hung in there really well; it was always going to be tough.

“Hats off to Jin for winning his first professional tournament.”