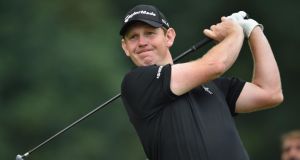 This is decision day, appropriately enough being delivered by McGinley at the Wentworth Club outside London – where the PGA European Tour is headquartered and where the 1953 Ryder Cup was played – and the Dubliner knows that a realistic case can be made for every one of those players in his thoughts.

It has come to this. The four players being tossed around the brain cells in McGinley’s head before naming his three captain picks for the Ryder Cup at Gleneagles are: Stephen Gallacher, Luke Donald, Ian Poulter and Lee Westwood.

There are a number of different ways to look at who will get the nod, and who won’t. In assessing the European Ryder Cup qualification process – which came to an end with Sunday’s Italian Open – then Gallacher was the one who was closest to securing an automatic place, losing out to Graeme McDowell by the narrowest of margins (170.2 points to G-Mac’s 171.8). Shouldn’t that count for something?

But there is more than that. He is also Scottish, with the match being played on a course – at Gleneagles – where he has consistently played well. He was runner-up in the Johnnie Walker there last year and finished tied-sixth in each of the previous two years, in 2012 and 2011. Of those 12 rounds, nine of them have been in the 60s with a low of 64 in last year’s third round.

One other factor in Gallacher’s favour is that his recent form has been better than any of the other likely lads and, ranked 34th in the world heading into Italy, only Luke Donald (29th) was ahead of him. Ian Poulter was 35th in world, and Lee Westwood – who missed out on the last three legs of the FedEx Cup play-offs – was 37th.

Interestingly, Paul Lawrie is of the opinion that McGinley’s decision to have three wild card picks gives him the leeway to opt for a rookie like Gallacher. In accepting it would be “harsh” to leave former world number one Donald out, Lawrie also made the point: “I’m not sure the course suits Luke Donald all that much . . . for me, I think the course sets up better for a Stephen Gallacher than it does for a Luke Donald.”

However, Donald was also one of those players who publically voiced support for McGinley in the run-up to the captaincy vote in Abu Dhabi last year. Donald, Poulter and Rory McIlroy led the chorus of voices favouring McGinley after Darren Clarke withdrew his name and Colin Montgomerie emerged as a late candidate.