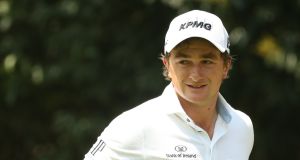 Paul Dunne carded an eight-under 64 in the first round of the Houston Open. Photograph: Gregory Shamus/Getty Images

Ireland’s Paul Dunne blazed to the top of the leaderboard at the Houston Open after he completed an eight-under-par 64 when completing his first round on Friday morning.

The Greystones golfer was six under after 14 holes when play was suspended due to darkness on Thursday, having carded four birdies and an eagle.

Resuming early on Friday morning on the par-five 15th, Dunne failed to make a birdie but then rattled off back-to-back gains on the 16th and 17th before a par on the 18th helped him record his best PGA Tour score.

With the second round already underway, Dunne was joined by Shawn Stefani and Ryan Armour on eight under. Dunne swill start his third round at 3pm Irish time.

Dunne’s performance capped a brilliant start for the four Irish in contention in Houston, where the winner will earn an invite to next week’s Masters at Augusta, if they haven’t already got one.

With five missed cuts in six appearances on the PGA Tour so far this season, Pádraig Harrington made a timely return to his old self with an opening, bogey-free five-under-par 67 on the weather-affected first day.

Almost like a magician mysteriously plucking a rabbit from a hat, the 46-year-old Dubliner’s season travails were dispatched and replaced by an aggressive playing strategy that garnered five birdies.

With heavy overnight rain, more than two inches, water-logging areas of the course, there was a two-hour delay to the scheduled tee-times and, when the round did belatedly get under way, it was with lift, clean and place in operation on the fairways. “It is what it is, we played ball in hand,” remarked Tony Finau.

Yet the early morning disruption on Thursday didn’t impact on Harrington, who enjoyed his low round of the season.

Harrington’s form this season has been one of missed weekends, missing the cut on no fewer than five occasions (most recently at the Arnold Palmer Invitational) and only managing to survive the cut at the Genesis Open where he finished a lowly tied-64th.

But Harrington – with Augusta on his mind – demonstrated a timely return to form, starting his round on the 10th with an opening birdie where his wedge from 115 yards finished five feet from the pin and he confidently rolled in the putt. Further birdies followed at the 12th (nine feet) and 15th (again nine feet) as his wedge play allowed him to fire at pins, and he then added a 25 footer on the fifth and a tap-in from 20 inches on the eighth to sign for a 67.

Séamus Power enjoyed a career-best top-five finish on the PGA Tour at last week’s Corales Championship in the Dominican Republic and carried that momentum with him to Texas, where he birdied the final three holes – coming home in five-under 31 – to match Harrington’s opening round.

Shane Lowry also enjoyed a promising first round - a four-under par 68 with three birdies in a row on his final three holes - the seventh, eighth and ninth.