Pádraig Harrington withdraws from US PGA 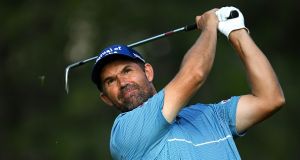 Ireland’s Padraig Harrington has not competed on the PGA Tour since it resumed from the Covid-19 shutdown. File photograph: Getty Images

Former champion Pádraig Harrington has pulled out of next week’s US PGA Championship.

Harrington, who lifted the Wanamaker Trophy at Oakland Hills in 2008, has not played competitively since the coronavirus pandemic forced golf to shut down in March.

Europe’s Ryder Cup captain wrote on his personal website: “After much deliberation, I have decided not to travel to next week’s PGA Championship.

“As Covid-19 currently looks to be under control in Ireland, I am taking the prudent approach by following the guidelines and reducing the risk as much as possible by staying at home.

“I’m sure I’ll be watching every shot on TV with great interest and hopefully I’ll have many more years to play in the PGA Championship.”

Molinari announced earlier this month that he and his family were moving from London to California, although he did say at the time his aim was to be back for the US PGA.

Lee Westwood and Eddie Pepperell have made the decision not to travel across the Atlantic, despite the late easing of quarantine restrictions for players and essential personnel.

Harrington and Molinari have been replaced in the field by Americans Talor Gooch and Troy Merritt.

England’s Paul Waring has also withdrawn from the US PGA after failing to recover from an ongoing back injury.

The world number 86 from Birkenhead is replaced in the field by American Russell Henley.