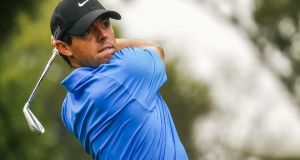 Rory McIlroy will play in the Final Series despite not playing the minimum number of events required Photograph: Tannen Maury/EPA

The European Tour did not set a dangerous precedent by allowing Rory McIlroy to compete in the Final Series even though he has failed to play the minimum number of 2014-15 events, its chief executive said.

Keith Pelley, who took over from George O’Grady in August, told Reuters in an interview at the British Masters on Saturday that the protocol he observed in making his decision would be applied to everyone else if the situation occurred again in the future.

Asked if he had created a dangerous precedent, Pelley replied: “I totally disagree. I think if that was to happen with another player I would go through the exact same forensic analysis.

“With Rory I understood the commitments he had in America and we had external doctors verify the fact he couldn’t play in more tournaments (than the obligatory 13).

“I think what we have now is a process in place to properly analyse if this situation was to re-occur and I would look at it the same and make a decision based accordingly on the actual regulations.”

The Final Series, a lucrative four-tournament series that brings the curtain down on the European season, kicks off at the Turkish Airlines Open this month and ends with the DP World Tour Championship in Dubai in November.

World number three McIlroy, who is based in Florida but is the biggest attraction on the European Tour, ruptured ankle ligaments in a friendly game of soccer in July and the Northern Irishman’s season was severely disrupted as a result.

“It was a decision we didn’t take lightly,” added Canadian Pelley. “We took a detailed forensic analysis of all aspects of the situation.

“We looked closely at all his medical reports, we worked closely with his team, closely with Rory and at the end of the day we made a decision we thought was in the best interests of the European Tour.

“If going forward now that was to happen with any other player, we basically have a process in place.”

Another standout announcement made by Pelley during his short spell in charge was to drop next year’s WGC-Bridgestone Invitational in Ohio from the European Tour schedule.

The WGC event, won by Irishman Shane Lowry in August, has been played the week before the U.S. PGA Championship in recent years.

It has been an official European Tour event that counts on the money list and Ryder Cup rankings but golf’s inclusion at the Rio Olympics next August has forced the PGA Tour to bring the Bridgestone forward to June 30-July 3, setting up a clash with the French Open.

Pelley was keen to underline the non-sanctioning of the Ohio tournament was strictly a one-off move.

“The Bridgestone non-sanctioning was an easy decision based on ... the Alstom Open de France having been part of our schedule for so many years,” he said.

“For me that (decision) is a one-off. We need to work closer with the PGA Tour to make sure WGC events, which are critical to the sport of golf, are scheduled in a more efficient manner for both tours and we are having those conversations right now.”

Pelley, in his previous job as president of Rogers Media, was responsible for 51 radio stations, 56 publications, 12 national TV stations plus 42 local stations and 300 digital properties as well as the Toronto Blue Jays, Canada’s only Major League Baseball team.

He said he was determined to involve the European Tour’s players in all key decisions moving forward and was grateful for their backing over his support for the French Open.

“I’ve had an incredible positive reaction from the players over the decision,” said Pelley. “The French Open has been a key part of our fabric for years.

“I talk to the players about everything and I get their feedback. We are a members organisation and they are critical to everything we do.”