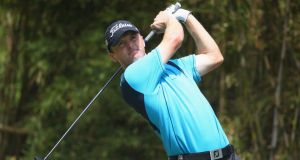 Michael Hoey drifted to a 31st place finish in the Thailand Classic after he carded a final round score of 71 to ened the tournament on eight under par.

Hoey had made an outstanding start at Black Mountain and was the leader heading into the second day, however he failed to kick on and three birdies and two bogeys in his final round left him eight shots off eventual winner Andrew Dodt.

The world number 281 was as surprised as anyone by the victory, his second on the European Tour after winning in New Delhi in 2010.

Instead of kicking-on from that success, the 29-year-old endured a difficult time and had not had a top 10 finish since, only regaining his Tour card in November at qualifying school.

“I’m speechless - it’s just come out of nowhere,” he said after his third consecutive 67 gave him a 16-under total.

“I played really well yesterday and today but I just didn’t think I’d come out on top. I knew I was playing well but to come out and win is just a dream come true.

“Losing my card two years ago was probably the best thing that could have happened to me. I went home last year, spent 12 months at home, played the Asian Tour again, found myself again, found my game and to be in the winner’s circle again - it’s unbelievable.”

Dodt begun the day at the Asian Tour co-sanctioned event four back of compatriot Hend but immediately ate away at the deficit by opening with three birdies.

Hend also had a bright start with two birdies in his first four holes but a bogey at seven and a string of pars allowed Thongchai, the tournament ambassador, to draw level at 16-under after the Thai recorded a birdie three at the 12th.

The 45-year-old Thongchai, however, tossed in a costly double bogey seven at the next after finding the hazard which looked to have ended his hopes.

However, he recovered back-to-back birdies to join Dodt at 16-under after the Australian picked up a fifth shot of the day at the 15th after also collecting one at 12.

Hend’s hopes ended with bogeys at 14 and 17 leaving Thongchai as Dodt’s main challenger but the Thai three-putted the 16th for a bogey to fall one back.

The Australian, playing in the three-ball ahead of Hend (72)and Thongchai, was able to par in to set the clubhouse mark after narrowly missing with a 10-foot birdie putt at the par-five last.

He then watched anxiously as Thongchai reached the last in two but the Thai again encountered three-putt woe. His eight-foot birdie effort to force a playoff just missed the cup and he finished with a 71, level with Hend, as Dodt took the title.