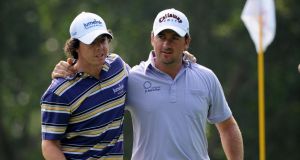 November 25th, 2011 Rory McIlroy while playing in the World Cup for Ireland at Mission Hills with Graeme McDowell “In the island of Ireland you have people playing rugby, cricket, hockey and golf, and if you play for your country you play for the whole of Ireland. It never has been that big a deal in rugby so I feel it shouldn’t be a big deal in golf, either.

“It’s hard because I’m Irish but also Northern Irish and whatever you want to call me, but I have no real strong allegiances to any flag or nation. I am from where I am from and, if people want to accept me as British, then they can and, if they want to claim me as Irish, they can as well.” September, 2012 McIlroy says he feels more British than Irish “What makes it such an awful position to be in is I have grown up my whole life playing for Ireland under the Golfing Union of Ireland umbrella. But the fact is, I’ve always felt more British than Irish.

Maybe it was the way I was brought up, I don’t know, but I have always felt more of a connection with the UK than with Ireland. And so I have to weigh that up against the fact that I’ve always played for Ireland and so it is tough.” February, 2012 Padraig Harrington on who McIlroy should opt for at the Olympics “Why keep asking Rory to make an emotional decision? Rory can get away from the emotional decision by saying, ‘Look, I am going to do what is logical and best for golf on this island. What’s logical and best for golf on this island, as things stand today, is for the two boys (Rory and Graeme McDowell) to declare for Great Britain and for four from the island of Ireland to play in the Olympics.” January, 2013 McIlroy, BBC documentary “I just think being from where we’re from, we’re placed in a very difficult position. I feel Northern Irish and obviously being from Northern Ireland you have a connection to Ireland and a connection to the UK.

If I could and there was a Northern Irish team I’d play for Northern Ireland. Play for one side or the other – or not play at all because I may upset too many people. Those are my three options I’m considering very carefully.”

April, 2013 McIlroy in response to the R&A’s Peter Dawson who suggested that the decision might be taken out of his hands. “I don’t want to feel pressured into who I represent. I have a choice, and they can’t take that away from me.” July 2013 Shane Lowry on McIlroy “If Rory sees himself as British and wants to play for Britain, I mean, I’m still good friends with Rory and will be for a long time and probably forever. To be honest, I feel for Rory in that decision. I know what he’s going through. I don’t envy him and wouldn’t like to have to make that decision.”

July, 2013 Graeme McDowell on McIlroy “I’m very lucky that I’m not under the same spotlight and scrutiny that Rory’s under. He’s in a no-win situation. It’s a disappointing spin-off of the whole Olympic scenario.”

May, 2014 McIlroy speaking at the Memorial tournament about whether he had decided who he would represent in the Olympics. “No. I think we’ve had a few conversations with the R&A and IOC and talking about taking the decision out of my hands in some way. It’s not as far away as it was. It’s a couple of years away. But I’ve still got a bit of time to sort of think about it. And I think 2016 is going to be a very busy golf season with that and the Olympics and everything else that’s going to be going on. So, yeah, it’s one of those things that I just gotta be 100 per cent comfortable with whatever I decide and go with it.

Connacht come out on top in nine-try clash with Edinburgh 22:51
Ronan Finn on why Shamrock Rovers are worthy champions 22:00
Jamie Vardy comes on to score winner at Arsenal 21:41
Limerick score 36 points to overpower Tony Kelly’s solo act 19:48
Rusty Ireland see ‘glass half full’ after overcoming Italy 19:33
Here is your handy guide to sport on television this week