Luke Donald misses out yet again at Hilton Head 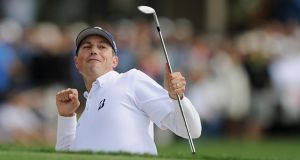 US Golf round-up: American Matt Kuchar ended a frustrating run of close calls in spectacular style when he holed a bunker shot on his final hole to win the RBC Heritage in South Carolina on Sunday night.

Minutes after three-putting the 17th from four feet, Kuchar responded emphatically by sinking a 20-yard sand shot for birdie at the par-four 18th to beat third-round leader Luke Donald by one stroke at Harbour Town on Hilton Head Island.

“I wish it wasn’t that great a finish but I made it that way after 17 and, man, that was so thrilling to see that ball disappear,” said Kuchar, in a green side television interview. “To hole the bunker shot in that fashion is something I’ll never forget. That was a full-on Augusta National roar (from the gallery).”

He had been in contention in the final round the previous three weeks, finishing no worse than fifth, but had stumbled down the stretch, most notably at the Houston Open, where he bogeyed the last and lost a play-off.

The 35-year-old looked to have squandered another chance after missing a four-footer and a two-footer at the penultimate hole.

“It was blowing pretty hard on that green. I tried to play it straight (and) it went a little left,” said Kuchar of his first putt. “I know that’s not a characteristic of mine to three-putt from four feet (and) I wanted to have another chance.”

Donald, meanwhile, narrowly missed a 30-yard birdie chip at the last and was left to rue another near-miss at Harbour Town, where he has finished second or third five times in the past six years.

Americans Ben Martin (67) and John Huh (68) finished one shot further back in a tie for third.

Donald started the day with a two-shot lead and shot 69, but it was not enough for the former world number one, who double-bogeyed the par-four sixth after hitting his tee shot out-of-bounds.

“I caught a gust there and took me right out of my rhythm and (hit a) big snap hook,” Donald said. “I hit a poor tee shot (into a water hazard) on 10 and would love to have given myself a better chance on 18 but other than that I hit a lot of solid shots.”

“To put my name on a list of champions here, that is so great,” Kuchar said. “This means a lot to me.”

Defending champion Graeme McDowell carded a one-under-par 70 in his final round, finishing in a tie for 23rd position on two under.

Spaniard Miguel Angel Jimenez made his Champions Tour debut in style when he won the Greater Gwinnett Championship by two strokes over Germany’s Bernhard Langer in Georgia on Sunday.

A week after finishing fourth at the Masters, Jimenez became the 18th player to win in his first start on the senior American circuit and only the third to lead from start to finish in a Champions Tour debut.

But the 20-time European Tour winner indicated afterwards that he would focus primarily on his home tour for the rest of the season as he tries to qualify for the Ryder Cup in September.

“I’m playing very well and now you don’t know what to do, but I need to do my points for the Ryder Cup,” Jimenez told the Golf Channel.

Jimenez, who turned 50 in January, will become the oldest European Ryder Cup member if he makes the team.

He has played four Ryder Cups, most recently in 2010.

Jimenez, who is ranked 32nd in the world, is already the oldest player to win on the European Tour.

1 Rory McIlroy admits Portrush nightmare was catalyst for his return to the top
2 Garry Ringrose to stay with Leinster as he signs two-year central contract
3 ‘For 25 minutes I ran out of oxygen’: Pepe Reina on his coronavirus battle
4 Fraternal ties a big factor in Kilkenny's rise to prominence
5 Karen Robinson Walton: I am looking at him. I say ‘Benjamin, what have we done?’
Real news has value SUBSCRIBE