Matt Jones holds off Jordan Spieth to fulfil a dream

‘I fought it out, ground it out and that’s something I can use down the road’ 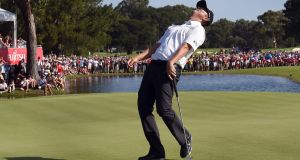 If recent history is anything to go by, Matt Jones should have major expectations for 2016 after winning the Australian Open at his home course on Sunday.

The US PGA tour regular followed some pretty illustrious footsteps by clinching the Stonehaven Cup with American Jordan Spieth and Northern Ireland’s Rory McIlroy the names immediately above his on the trophy.

Like Jones, the Australian Open was the first win of the year for both Spieth and McIlroy and in their cases, they used their Sydney success as the launch pad for spectacular following seasons, both winning two major championships.

While McIlroy snatched victory from Adam Scott on the final hole in 2013 and Spieth smashed the course record in his final round in 2014, however, Jones’s fourth round two-over-par 73 was a more nervous affair.

A double bogey at the second and a triple at the ninth saw his overnight lead disappear and he perhaps can count himself fortunate that Spieth was not at his best and Scott, who shared second with the American, started the day so far off the pace.

“To win majors, I’d have to play a lot better than I did today on a Sunday. That just wouldn’t cut it in a major against those guys,” Jones told reporters.

“(But) I battled away today, which was fantastic. I could have let it slip and let it get away easily but I fought it out, ground it out and that’s something I can use for later on down the road.”

Jones got his maiden US PGA Tour win at the Houston Open last year and banked close to $2 million with four top 10 and seven top 25 finishes in 2015.

The 35-year-old led after the second round of the US PGA championship earlier this year but faded over the final two days to finish in a share of 21st.

He showed much more grit on Sunday, however, digging himself out of trouble at the 10th to rally from his calamitous ninth hole and saving par at the 12th by chipping in from a bunker.

“I just told him, that was one of the best fought wins I’ve ever seen, to come through what he did on two, nine and then that par he made on twelve,” Spieth told reporters.

“Twelve was by far the tipping point in the round.”

It was perhaps appropriate that a local should win the 100th edition of the Australian Open and few were more local than Jones, who has been a member of the host Australian Golf Club since he was 15.

The names Jack Nicklaus, Arnold Palmer and Gary Player were already on the Stonehaven Cup but for Jones, nothing compared to emulating the success of his boyhood hero Greg Norman.

“It’s amazing,” Jones said. “It’s something I would have thought about from when I was six when I first met him.

“It’s a dream come true for me and it’s something that I can’t have taken away from me.”

1 Sonia O’Sullivan: Taming The Tan gave us one last roll of the dice before shutdown
2 Avoid the treadmill at all costs – marathon training in the 2km radius
3 Ireland’s underage rugby stars miss out on chances to shine at Easter
4 ‘NRL Island’ being considered in Australia to continue season
5 America at Large: On Long Island, longing for a return to our field of dreams
Real news has value SUBSCRIBE