Manassero shows no signs of slowing up in Sweden 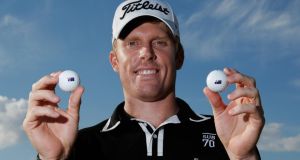 Australia’s Andrew Dodt poses with two golfs balls after he scored a hole in one on the seventh and 11th holes in the second round of the Nordea Scandinavian Masters in Stockholm, a first in European Tour history. Photograph: Dean Mouhtaropoulos/Getty Images

European golf’s man of the moment Matteo Manassero shot a second-round 65 to take a two shot lead at the Nordea Masters in Sweden on a day when Ireland’s Alan Dunbar made the cut in his first European Tour event as a professional.

After opening with a a level-par 73, the 23-year-old Rathmore golfer carded a three-under-par 69 in his second round to secure his first pay cheque after accepting a sponsor’s invite to take part in the event.

Manassero kept up his great form after winning the BMW PGA Championship last weekend by moving to 13 under after adding a 65 to his opening 66.

It gave the 20-year-old a two-shot lead over Finland’s Mikka Ilonen, who fired a stunning 63, while Scotland’s Peter Whiteford matched that score and is a shot further back on 10 under.

Manassero landed the fourth title of his blossoming career at Wentworth last Sunday and there has been no holding him back in Sweden so far.

He reached the turn in a healthy two under par but five birdies on the back nine saw him shoot past Whiteford, who was already in the clubhouse.

Low scoring was the order of the day, with the temperature warm and the sun out, and Whiteford relished the chance to set an early clubhouse target.

“It’s a good start but there’s a long way to go. I’ve had nine under two or three times in my career but I’ve never gone better than that,” he said.

“I have been swinging pretty well over the past month but today was special. It was near perfect conditions and the golf course is in great shape.”

Whiteford, 32, has never won on the European Tour but he had an impressive second place at the recent Ballantine’s Championship in South Korea, where he lost out in a play-off to Australian Brett Rumford.

He finished off in style today, pitching in for an eagle at the 622-yard par-five 15th which he followed up with birdies all the way home.

Dutchman Joost Luiten reached nine under after a 67, while Swedish players Jonas Blixt and Alexander Noren were flying the flag for the hosts. Blixt signed for a 66 and Noren a 69 as they reached eight-under 136, one ahead of compatriot Rikard Karlberg, Italian Francesco Molinari, Denmark’s Thomas Bjorn, and Welshman Jamie Donaldson.

The first-round co-leader, Spaniard Pablo Larrazabal, recovered from a triple-bogey six at the short 11th hole, with four birdies thereafter repairing the damage and giving him a round of 70. It was not ideal, given the conditions, but enough to move him alongside Blixt and Noren on eight under.

Damien McGrane recovered from an opening 73 to make the cut after a five-under 67 moved him to four under.

An amazing seven birdies in eight holes on the back nine wasn’t enough for Peter Lawrie to make the cut, with the Dubliner running up a triple-bogey six on the par-3 16th to end a run of five straight birdies.

He then birdied the final two holes to card a five-under 67 and close on one under, a shot outside the cut.

Darren Clarke finished on one over after a 73, while David Higgins also misses the weekend play after a 76 left him on seven over.

England’s Paul Casey squeezed through on the cut mark and so did Australian Andrew Dodt, in extraordinary fashion.

Dodt made two holes-in-one in his round, the first player to achieve that feat on the European Tour, as he went straight from tee to cup on the seventh and 11th holes in a round of 65, after yesterday’s 77.